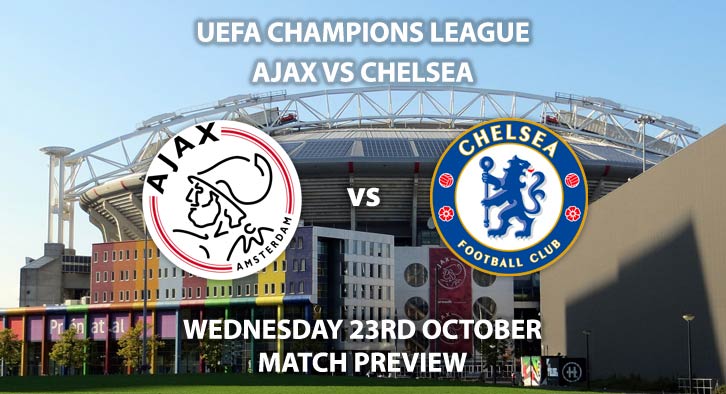 The Dutch outfit have won both of their matches so far in Group H with wins over Valencia and Lille. Last season’s golden boys have shown no signs of slowing down from their marvellous 2018/19 campaign that saw them lose key players in Frenkie De Jong and Matjias De Ligt.

Chelsea made up for their opening match defeat to Valencia with a 2-1 victory over Lille and have the momentum heading into this match. On the weekend, they narrowly defeated Newcastle to make it five wins in a row in all competitions.

Ajax are priced at 13/10 to win the match on SkyBet. The Eredivisie Champions will have their eyes set on another long run in this competition. They face the toughest team in their Group in Frank Lampard’s Chelsea on Wednesday. The attack of Ajax has been a pleasure to watch so far this season, with five goals scored from two matches. Hakim Ziyech stole the show against Lille with an incredible long-range strike. The attacking midfielder is going from strength to strength at Ajax and is 13/2 to score first.

Ajax are yet to concede in the Champions League. They are 7/2 to win to nil.

Chelsea are priced at 19/10 to win the match. Chelsea are making strides under Frank Lampard in his first season at Stamford Bridge. One player who is reaching new heights is striker Tammy Abraham. The English starlet has eight goals so far in the Premier League and is causing all defences big headaches. The target man is likely to start up front for the Blues and is priced at 5/4 to score anytime.

Also, keep an eye on Mason Mount – who resembles his boss Lampard in many ways. The midfielder is a real talent to watch and will likely be fearless against the Dutch giants.

The referee for this match will be Romanian Ovidiu Alin Hategan. In Ajax’s last Champions League match, they received 60 booking points with manager Erik ten Hag wanting his side to impose themselves more physically.

It is a tough one to call. Both teams capable of scoring but can’t see either getting that winning edge.