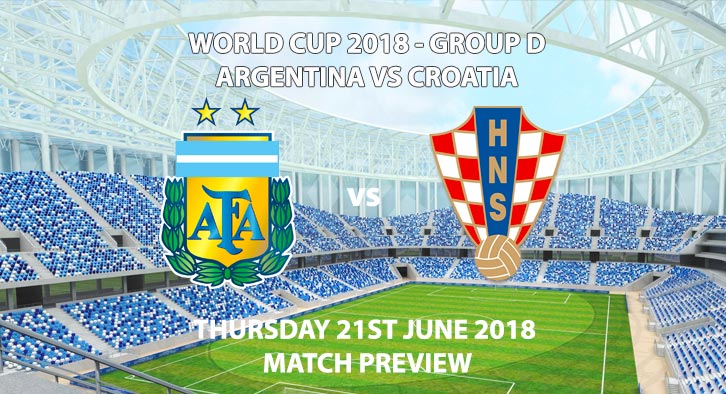 Argentina Argentina will be hoping to open their account for the tournament when they face off against group-leaders Croatia on Thursday.

Lionel Messi endured a tough start to the World Cup, missing a crucial penalty as Argentina drew 1-1 with Iceland. Despite Sergio Aguero opening the scoring with his first ever World Cup goal, it was not enough to get them off to the perfect start. Argentina confirmed what a lot of people had already thought; going forwards they are dangerous but defensively they’re vulnerable. With Iceland sitting 11 men behind the ball and counter-attacking Argentina struggled to break a resilient rear-guard. Messi was swamped whenever he was in possession, whilst there was no room for Aguero to work his magic.

Croatia are unlikely to sit as deep as Iceland did. They have far superior footballers and will, therefore, look to play a more possession-based game. They got off to a dream start with a comfortable 2-0 win over a lifeless Nigeria. Luka Modric was influential as always before sealing the win with a second-half penalty. Croatia have an incredibly talented squad, especially in midfield, the main question mark hanging over them is can they score enough goals? They will be hoping for the likes of Ivan Perisic and Andrej Kramaric to help frontman Mario Mandzukic in order to fire them into the last 16.

Ravshan Irmatov is the referee for this game. The Uzbekistan official also officiated Argentina’s 4-0 defeat to Germany back in 2010. Over 164 international matches, he has averaged 3.43 yellow cards and 0.25 reds per game. Therefore, I would advise a maximum of 40+ booking points for this natch.

I can’t see this game being a particular high-scoring affair. It will be a tactical battle, in which neither side will want to lose. Therefore I’m going for a score draw, although Argentina will be desperate to get their first win of the tournament.