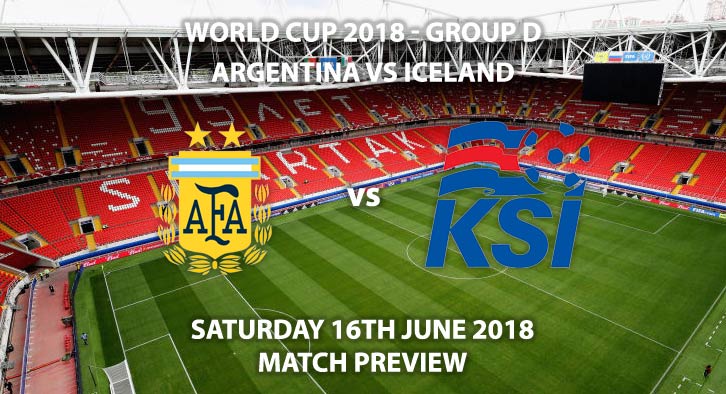 Argentina vs Iceland – Lionel Messi will be hoping to inspire Argentina to victory as they kick off their World Cup campaign against Iceland.

Messi, who single-handedly dragged Argentina through qualifying, will be looking to add the final trophy to his cabinet this summer. After losing the final in 2014 to Germany, the Argentine forward will hope to follow in Diego Maradona’s steps by leading his country to victory. Qualification was far from plane sailing for Argentina. It took a Messi-inspired performance against Ecuador to seal their place in this summer’s tournament. Despite boasting a forward line as good as any in the competition, with the likes of Sergio Aguero, Gonzalo Higuain and Paulo Dybala, they look far from fluid.

Without their forwards, this is a very ordinary Argentina side. It looks unbalanced, as Alejandro Sabella tries to fit in all his attacking stars. At the back and in midfield they lack the same quality as other leading nations such as France, Spain and Germany. They will also be without West Ham playmaker Manuel Lanzini after he suffered a long-term knee injury in training, which has ruled him out of the tournament.

After creating a huge impression at the European Championships two years ago, Iceland will be hoping to showcase their credentials once more. That shock victory over England has lived long in the memory and will be used as inspiration when they face Argentina. With Denmark and Peru making up the rest of Group D, it will be an interesting battle to see who can progress into the round of 16. I would make Denmark favourites, however, Iceland will relish the tag of ‘underdogs’. Everton midfielder Glyfi Sigurdsson will once again be their star man, despite missing the last two months through injury. Burnley’s Johann Gudmundsson will also be a threat after an impressive season with the Clarets.Iceland could well provide another shock here. It won’t be as cut and dry as many may expect. However, with Messi in their ranks, Argentina should have enough to kick off their World Cup campaign with a win.