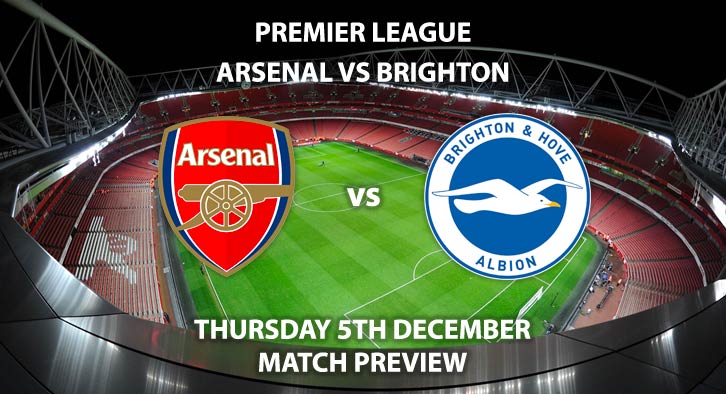 Freddie Ljunberg will embark on his second match in charge of Arsenal as they host Brighton and Hove Albion this Thursday in Premier League action.

The Gunners are going through a transitional process since Unai Emery’s sacking and ex player Ljunberg is in the hot seat, for now. He will be hoping for a better result than the 2-2 draw with Norwich in his curtain raiser. Meanwhile, Brighton are also looking to end some poor form after three losses on the bounce.

Arsenal are priced at 8/13 to win the match by SkyBet and end their eight-game winless run. It is no secret that the North London club is having their problems on and off the pitch. During this eight-match run without a win, they have also failed to keep a clean sheet. However, they do possess plenty more quality throughout their squad than their Thursday night opponents.

Striker Pierre-Emerick Aubameyang has yet again been the only player to gain any credit this campaign and has ten goals to his name so far. He is priced at 13/5 to score the matches first goal.

Brighton and Hove Albion are priced at 19/5 to win the match and possibly create more space between themselves and the relegation places. The visitors are in bad form, but in fairness, had a tough run of fixtures and just faced Manchester United, Leicester City and Liverpool in back to back matches.

Whilst they have surprised a few people this season with some more free flowing football under Graham Potter, their away record is abysmal.

The South coast outfit have lost five of their last six matches on the road and have drawn the other. If they are to score at the Emirates, it is most likely to come from Neal Maupay – who is priced at 21/10 to score anytime.

The referee for this match will be Graham Scott. The official has not been too card happy this campaign thus far – with an average of 34.4 booking points from his eight topflight matches.

The match will be televised on Amazon Prime Video and kicks off at 20:15.

– The hosts have their best chance for a win in ages, against a struggling Brighton side.