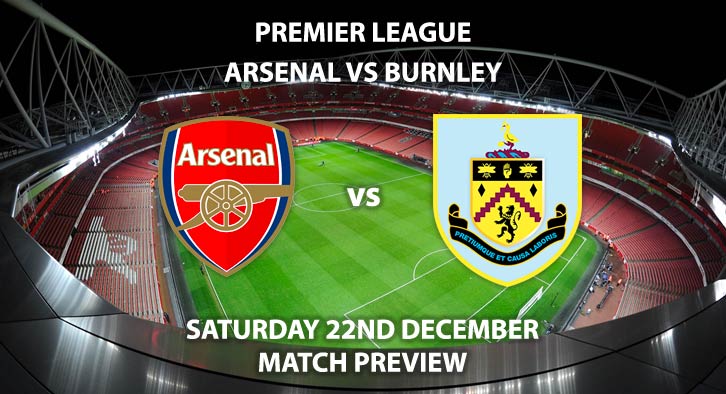 Arsenal vs Burnley – Arsenal will be looking to bounce back from two defeats in a week, after losing their 22-match unbeaten run, when they take on Burnley in the Saturday lunch-time match.

The Gunners came undone against Southampton last weekend, losing 3-2. Injuries have been the downfall of Unai Emery’s side. They are desperate for some defensive reinforcements in January. Hector Bellerin, Sokratis Papastathopoulos and Shkodran Mustafi are all out injured, alongside Sead Kolasinac and Rob Holding. Laurent Koscielny is back from a long-term lay-off but he is still finding his feet. Granit Xhaka has been drafted into the back four, which hasn’t really worked. With Emery wanting to play a back three, it is imperative they strengthen their defensive options.

In attack and midfield, they see to have found a good balance. The addition of a world-class defender could really help them push for a top-four finish. Mesut Ozil looks set to be on his way out after being left out of the squad for their last three matches. He played no part in their midweek 2-0 Carabao Cup defeat to Tottenham either, despite a number of youngsters being on the bench. Emery described that decision as ‘tactical’ which doesn’t bode well for Ozil’s long-term future.

Burnley dropped into the bottom three last weekend after losing to Tottenham. Despite frustrating Spurs for huge portions of the game, they came away with nothing after Cristian Eriksen’s 91st-minute winner. Saints win over the Gunners lifted them above Burnley, who are struggling to replicate their form from last season. Sean Dyche’s side need to return to their old ways, being hard to beat. Despite their poor form, Joe Hart has been terrific of late. After making his permanent switch from Manchester City in the summer, the former England number one seems to be rediscovering his best form. Southgate has never shut the door on Hart and if he continues to impress, he may find himself back in the squad.

Kevin Friend is the referee for this game. The Englishman has taken charge of 12 matches this season. In that time, he has accumulated an average booking points total of 40.8. As a result, I would recommend a maximum of 60+ points for this game.

Arsenal will be desperate to return to winning ways after a disappointing week. Burnley have shown character in their last matches but will need to be at their best to keep the Gunners at bay. I think it will be a closer match than most will expect but Arsenal will still win.

Arsenal vs Burnley will be televised live in the UK on Sky Sports Main Event with kick off at 12:30 GMT.

Odds and markets last updated on Saturday 22nd December @10:10 GMT. Keep checking back to see if there’s any updates to markets – the time stamp in the previous sentence for when we update tips on this page will be updated.