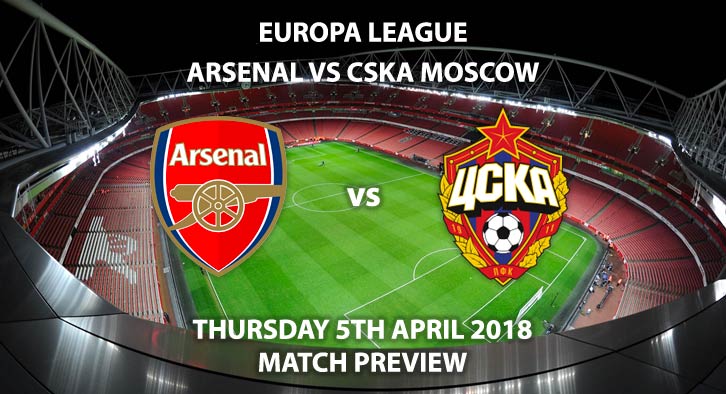 Arsenal vs CSKA Moscow: Arsenal will be hoping to make the most of home advantage as they host CSKA Moscow in the first round of their Europa League quarter-final tie.

The Gunners come into the match fresh from defeating Stoke at the weekend. Pierre-Emerick Aubameyang grabbed a brace alongside a goal for the returning Alexandre Lacazette in their 3-0 win. Lacazette will be hoping to start on Thursday following his return from injury but Aubameyang is ineligible having featured for Borussia Dortmund in the Champions League. This rule has, however, been removed ahead of next year’s competitions.

Danny Welbeck has been leading the line in Arsenal’s recent Europa League success, so it will be interesting to see who Arsene Wenger opts with from the start. They have won their last four games in a row, with three of those coming at the Emirates. They have only conceded one goal in those four games, scoring 11 times. With two more back to back home games to come, it’s crucial they make the most of their home comforts if they want to progress to the next round. Whilst the main priority will be ensuring they take a lead to Russia, they will hope to avoid giving the visitors any away goals in the process.

CSKA knocked out Lyon in the last round to move into the last eight of the competition. They currently sit third in the Russian Premier League, five points behind leaders Lokomotiv Moscow with seven games to go. They have won five of their last six games in all competitions. Despite losing the first leg at home to Lyon in the last round, they managed to defeat the French side 3-2 away from home. Therefore, Arsenal should seen that result as a warning; this is a team that can get a result on the road. Leicester City loanee Ahmed Musa is expected to lead the line whilst Russian midfielder Alan Dzagoev is their creative hub in the middle of the park.

Pavel Kralovec is the referee for Thursday’s clash. The Czech has officiated six games in Europe this season, brandishing 17 yellow cards. An average booking points total of 28.3 is nothing spectacular and thus booking points may be something to steer away from.

I think Arsenal will win, but it may be closer than some neutrals will expect. CSKA are no pushovers, which has been shown in the opposition they have beaten to get this far. Still, I expect the Gunners to come out winners in this match.

Arsenal vs CSKA Moscow will be televised live in the UK on BT Sport 2 with kick-off at 17:45.

Odds and markets last updated on 5th April 2018 @17:35 GMT. Markets may be updated prior to kick off so keep checking back before kick off for any further updates or markets.