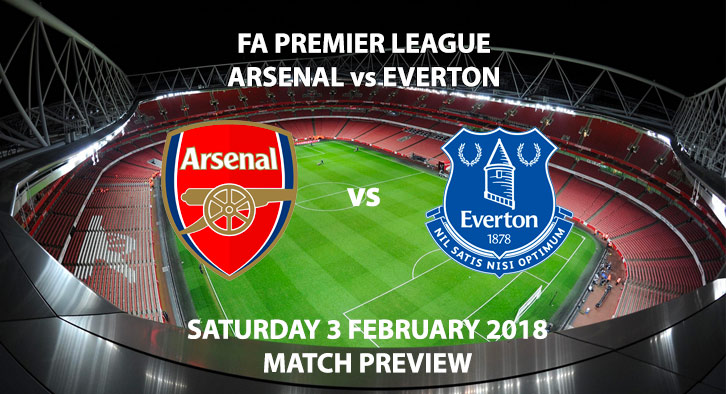 Arsenal vs Everton is the Saturday evening live televised game from the premier league. New signing Pierre Emerick Aubameyang will be hoping to make his debut as Arsenal host Everton at the Emirates.

Fresh from completing his deadline day from Borussia Dortmund, the Gabon international looks inline for his home debut against the Toffees assuming he overcomes a late illness. Blessed with lightning pace and great finishing ability, Aubameyang adds a more physical and dynamic option up front. His goal record in recent seasons speaks for itself, but the big question is whether he can transfer that form to the Premier League.

With Henrikh Mkhitaryan, Mesut Ozil and Aubameyang all at Wenger’s disposal goals shouldn’t be a problem; keeping them out may. The Gunners fell to a 3-1 defeat to Swansea in midweek, with more defensive relapses the cause of the loss. Whilst Aubameyang is a great addition to replace Alexis Sanchez, Arsenal are desperate for a world class centre back and holding midfielder.

The spine of the team is not strong enough when compared to their City rivals and until they address that issue, they have no chance of winning a Premier League title. A second away defeat on the bounce against relegation-threatened opposition is a testament to their lack of strength and character, whilst tougher fixtures against the top six loom in the next weeks.

Everton are without a win in seven games. Following their initial resurgence under Sam Allardyce, the Toffees have fallen back into bad habits and resemble more of the side that struggled under Ronald Koeman. Similarly, the Blues haven’t won away from Goodison Park since early December last year, losing three of their last four away ties.

Allardyce will be hoping that January additions Theo Walcott and Cenk Tosun can have the desired impact and breathe new life into an ageing Everton squad. With big changes expected in the summer, Allardyce’s main aim is to try and build some momentum and secure the club a top ten finish. They currently hold ninth place but after such a bad run they need a result quickly to avoid any chance of falling back into a relegation scrap.

Arsenal have won five of their last eight games against Everton, losing just two. Both of those defeats were at Goodison Park, with the Toffees last win away from home coming back at Highbury in 1996, over twenty years ago. Neil Swarbrick has been appointed as the referee after officiating West Ham’s 1-1 draw with Crystal Palace in midweek. Swarbrick has one of the lowest booking points in the league, with just 24.3 which ranks him third from bottom. In keeping with that record, he dished out just two yellow cards in Tuesday night’s game, which is a sign of things to come.

Whilst the Gunners have lacked authority at times, it has tended to be away from home. They have been good recently, in front of their home faithful and have scored a lot of goals. With Everton’s poor defensive record I think they’ll return to winning ways.

Arsenal to win to nil – (link no longer available)

Lacazette and Mkhitaryan to both score – 3/1.

More premier league game previews will be up for this weekend will be up in the tips and previews section of the site so keep checking back.