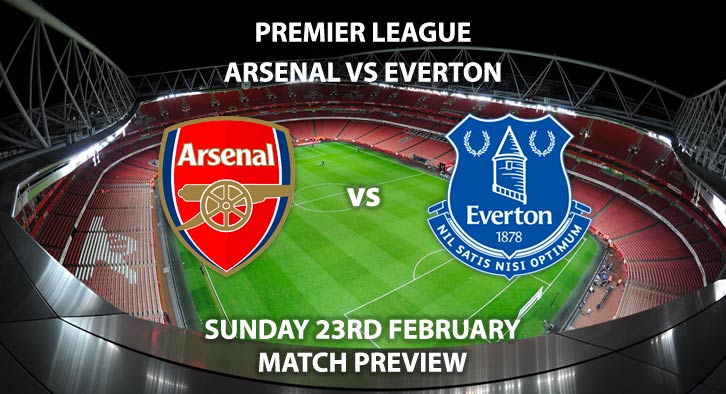 Arsenal return to Premier League this weekend when they host Everton on Sunday afternoon.

The Gunners fresh from their midweek Europa League triumph over Greek side Olympiakos will be hoping to get another win in quick succession, but this time in the Premier League.

Mikel Arteta’s side are unbeaten in their last nine matches in all competitions, and are yet to lose in this year. Last weekend’s Premier League win over Newcastle ended a run of four consecutive league draws, and added three points in their bid to secure European football for next season.

Everton are too in a good run of form, and have lost only once in the league since Carlo Ancelotti’s arrival on Merseyside. The Toffee’s are unbeaten in their last five encounters, winning three and drawing five. Since Ancelotti’s re-introduction to the Premier League with Everton, only Liverpool have taken more points.

Everton do however have a tendency to concede goals regularly, and have conceded the most goals of any team in the top ten (38). Arsenal on the other hand have defended astutely in recent weeks, and have kept three consecutive clean sheets in all competitions.

The last time these two sides met both Arteta and Ancelotti had not been announced as managers, Duncan Ferguson and Freddie Ljungbjerg took charge of their respective sides in a dull 0-0 draw at Goodison Park in December. Everton have won only one of the last six meetings between these two sides, which came last April. Arsenal have won four of the last six against Everton.

The referee for this weekend’s clash is Stuart Attwell. The 37-year old has averaged just over four yellow cards per game in his thirteen Premier League matches this season, and has also awarded two red cards. This considered, I would recommend a minimum of 30+ booking points for this encounter.

Arsenal vs Everton will be televised live on Sky Sports Premier League HD with kick off at 16:30 GMT.