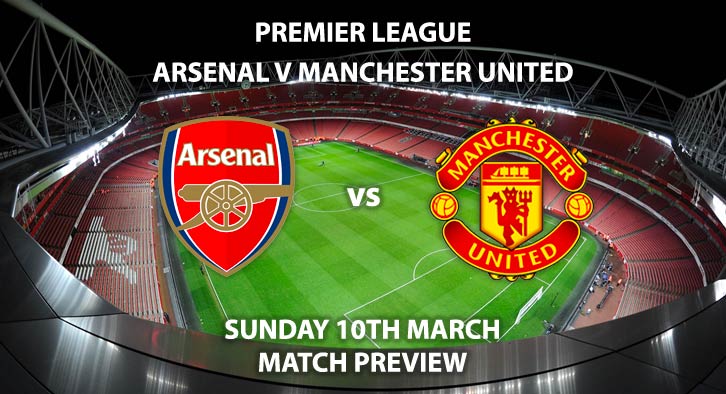 Arsenal vs Manchester United: Arsenal and Manchester United meet at the Emirates Stadium in a head-to-head battle that could boost either sides hopes of finishing fourth in the Premier League table.

The Gunners could be even further ahead in the race for fourth but for Pierre-Emerick Aubameyang’s late penalty miss at Wembley. The Gunners’ top scorer missed the chance to claim all three points for his side in the 90th minute of last weekend’s 1-1 draw with Tottenham. Instead, they go into this game a point behind Manchester United, who hold the elusive final Champions League spot. It was a good performance from Unai Emery’s side, who looked would have claimed the win thanks to Aaron Ramsey’s goal, had it not been for Shkodran Mustafi’s brainless push on Harry Kane. The point means they’re unbeaten in four league games and they’ve also won their last four at home. Their last defeat at the Emirates came against United, in the FA Cup.

Manchester United will come into this game buoyed by their dramatic, last-gasp win at PSG in midweek. Marcus Rashford’s stoppage-time penalty ensured the Red Devils went through on away goals. That makes them the first side ever to progress to the next round after losing the first leg 2-0 at home. That win only further strengthened Ole Gunnar Solskjaer’s push for the job on a full-time basis. To win at the Prince des Parc in such a manner, with ten first-team players injured and Paul Pogba suspended, is some feat. Romelu Lukaku continued his fine form with a third brace in as many games. The big Belgian is back firing in the goals and has formed a strong partnership up front with Rashford in recent games.

Jonathan Moss is the referee for this fixture. The Englishman has officiated 32 top-flight matches this season. In that time, he has accumulated an average booking points total of 39.5. Therefore, I would advise a maximum of 50+ total points for this fixture.

Manchester United will be on cloud nine after their win over PSG. However, with so many players injured, it will be a very similar side that plays on Sunday.  Arsenal are also in good form, which makes this a tough one to call, however, I’m going to side with a (very) narrow away win.

Arsenal vs Manchester United will be televised live in the UK on Sky Sports Football with kick off at 16:30 GMT.

Odds and markets last updated on Sunday 10th March @10:45 GMT. Keep checking back to see if there’s any updates to markets – the time stamp in the previous sentence for when we update tips on this page will be updated.

Remember to keep visiting the tips and preview area for further updates and betting previews around the domestic and European action during the week.