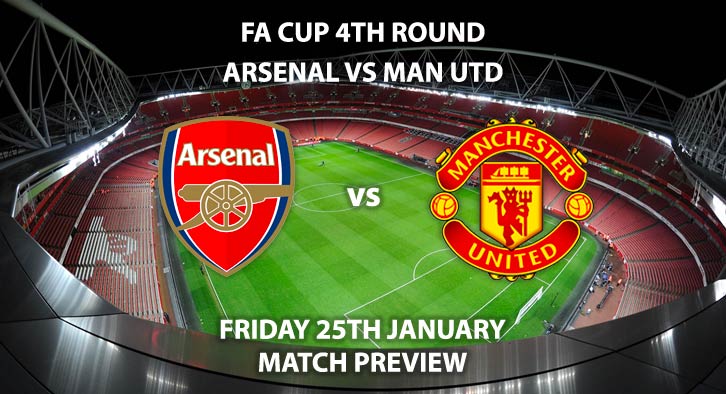 Arsenal vs Man Utd: Top-four rivals Arsenal and Manchester United lock horns at the Emirates in the FA Cup with both clubs looking to add silverware to their trophy cabinets this season. The Gunners will be hoping to build on their win over Chelsea last weekend after they secured a 2-0 victory. Goals from Alexander Lacazette and Laurent Koscielny made the difference as Unai Emery’s French contingent shone in a must-win fixture. That results has moved both Arsenal and Manchester United to within three points of Chelsea and has reignited the race for Champions League football. For Arsenal, finishing in the top four was always the target for Emery as he seeks to change their squad. If he could add some cup glory on top of a return to Europe’s elite competition, that would be a fine season. Arsenal made mass changes for their trip to Blackpool Town in round three, however, this represents a much tougher test. A first clean sheet in six league games will be a welcome sight ahead of this game. United have been in superb form since Ole Gunnar Solskjaer’s arrival. They made a huge statement against Tottenham with a 1-0 win and backed that up with a 2-1 victory over Brighton at the weekend. That made it seven straight wins for Solskjaer, who understands United’s strong history in this competition. Therefore, I would expect the Red Devils to name a strong side, to keep their momentum. Marcus Rashford looks reinvigorated by Solskjaer’s methods. It’s clear the Norwegian has taken the young forward under his wing, and his finishing has already improved during his two months in charge. The Englishman has scored in five of his last six games, playing as a centre forward and I wouldn’t back against him adding to that tally on Friday. Craig Pawson is the referee for this fixture. The Englishman has officiated 12 top-flight matches this season. In that time, he has accumulated an average booking points total of 48.8. Therefore, I would advise a maximum of 60+ total points for this fixture. Manchester United look unstoppable at present, led by the resurgent Paul Pogba and Rashford. I think their attack quality will prove too much for Arsenal’s defence to handle, which will see them edge a tight encounter. Arsenal vs Manchester United will be televised live in the UK on BBC One, with kick off at 19:55 GMT. Prediction: Arsenal 1-2 Manchester United

As always we don’t recommend covering every single pick – from the RequestABet selections we advise covering up to 3 bets depending on your budget. Odds and markets last updated on Friday 25th January 2019 @14:28 GMT. Remember to keep visiting the tips and preview area for further updates and betting previews around this weeks domestic action.