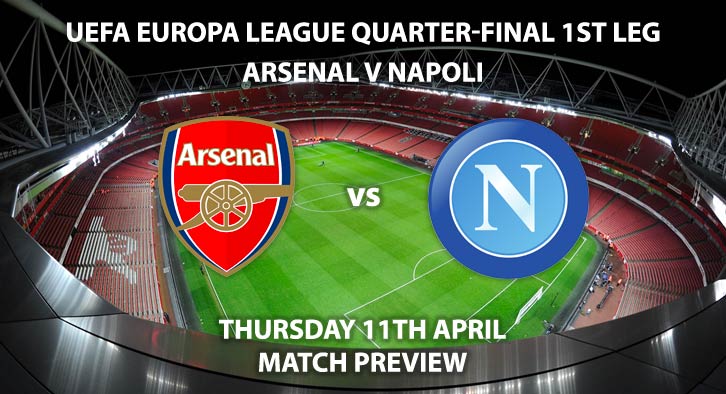 Arsenal and Napoli will lock horns on Thursday evening in the first leg of their UEFA Europa League tie.

The two are meeting in the quarter final stage of the competition and are both are top contenders to lift the trophy. The hosts advanced through to this round after a comfortable 3-0 victory over Rennes at home. Meanwhile, Napoli got through by the skin of their teeth with a 4-3 aggregate win over Red Bull Salzburg.

Arsenal are priced at 13/10 to win this match by SkyBet. Unai Emery’s side will want to avenge their 1-0 loss to Everton in the Premier League in the weekend just gone. Their last Europa League game saw them win comfortably with striker Pierre-Emerick Aubameyang grabbing a brace. The Gabon international is priced at 7/5 to score anytime and will be the main threat to the Italian’s defence.

Napoli are priced at very tempting odds of 19/10 to win. The Italian outfit are entering this match in dodgy form. They have won two of their last five matches in all competitions and lost the same amount. They are set for a comfortable second paced finish in Serie A and attacker Dries Mertens has been his usual clinical self. The Belgian has scored eleven goals this term with nine assists. He is 6/1 to open the scoring this Thursday evening.

The referee for this match will be Spaniard Alberto Undaino Mallenco. Both of their previous outings saw 45+ booking points and quarter final ties often see plenty of cards brandished. SkyBet are offering ADD for 50+ booking points.

Arsenal vs Napoli will be televised on BT Sport 2 and kicks off at 20:00.

– It’s tough to separate these sides, could be a moment of magic however likely they will draw.