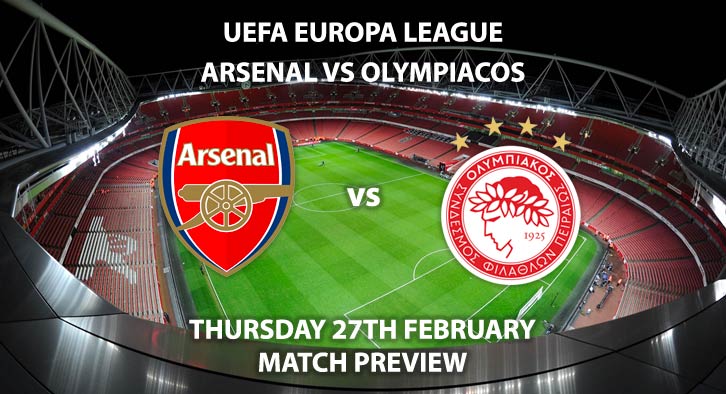 Arsenal host Olympiacos in the second leg of their Europa League Round of 16 tie at the Emirates Stadium on Thursday night.

The Gunners come into Thursday night’s clash with a 1-0 advantage following their victory away in the first leg a week ago. Alexandre Lacazette struck Arsenal’s winner in Greece and put his side in the ascendancy with the luxury of an away goal.

Mikel Arteta’s side come into Thursday’s encounter following a thrilling 3-2 victory over Everton on Sunday afternoon. The win lifted Arsenal to 9th place, and with that kept their hopes of securing European football for next season alive.

Olympiacos also enjoyed a victory of their own at the weekend as they defeated 2nd placed PAOK 1-0 away from home and increased their lead at the top of Greece’s super league to five points. Pedro Martin’s side are currently undefeated in Greece’s top division and have won nineteen of their twenty-five league matches this season.

Arsenal finished top of the pile in Group F and won three of their six group matches. The Gunners’ only defeat in this year’s competition came at home to Eintracht Frankfurt, so there is hope for Olympiacos as they travel to the capital on Thursday night.

Olympiacos were knocked out of the Champions League group stage and filtered through to this years Europa League. The Greek side finished third in Group B, behind group winners Bayern Munich and second placed Tottenham Hotspur.

Gabriel Martinelli has contributed to more goals more than any other Arsenal player in this season’s Europa League, with five goal involvements in six matches. (Three goals, two assists). SkyBet are offering odds of 15/8 for the young Brazilian to find the back of the net on Thursday evening.

Arsenal vs Olympiakos will be televised live in the UK on BT Sport 3 with kick-off at 20:00 GMT.