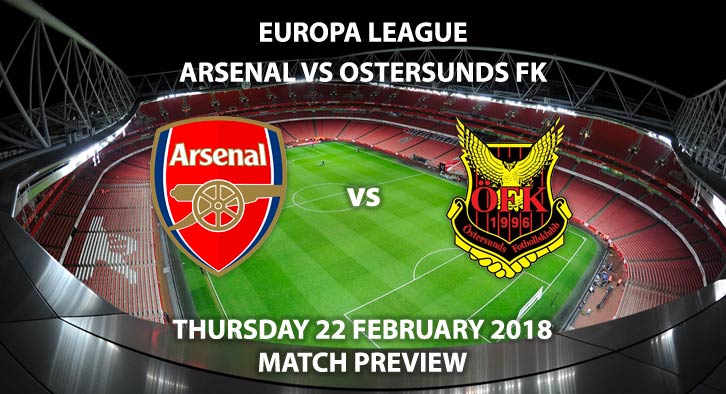 Arsenal vs Ostersunds – Arsenal will host Swedish side Ostersunds in the second leg of their UEFA Europa League Round of 16 tie. The first leg saw the North Londoners run out 3-0 victors in their travels to Sweden in which their efforts have all but booked them a place in the next round.

Last week’s first leg would have been pleasing for any Arsenal fan to watch, as their side ran a rampant display and sent a message to the rest of the competition that they are not to be taken lightly. Mesut Ozil and Nacho Monreal were amongst the goals as well as an own goal from Ostersunds defender Sotiris Papagiannopoulos that helped Arsene Wenger sit comfortably in his seat with the rest of the Arsenal coaching staff.

Their Swedish opponents however did make an account for themselves despite the heavy scoreline. With the less possession during the match of 44%, they managed to get 10 shots on goal with five on target however none were good enough to trouble David Ospina in the Arsenal net. In recent months, due to the Swedish League calendar, Ostersunds have been filling their weeks with friendlies. These have been against the likes of Dynamo Kyiv and Lokomotiv Moscow; in which they were able to draw both. Backtracking to their league campaign that ended in November 2017, striker Saman Ghoddos highlighted his importance to the Swedish outfit. He bagged 8 goals and 4 assists over the season; more than any other Ostersunds player.

The hosts have been fairing rather averagely this season in the Premier League. They are currently sixth in the standings 7 points behind their North London rivals Tottenham in fifth. At the Emirates they have not found scoring hard to come by as they have scored two or more goals in 84% of their home Premier League matches. Summer signing Alexander Lacazette hasn’t had a fruitful spell at the Emirates after starting his Arsenal career in such bright fashion. The Frenchman has scored nine goals with three assists in the league and the new signing of Pierre Aubameyang has also got fans excited for the Gunners frontline.

Despite their efforts at one end of the pitch, Arsenal’s disciplinary record is far from perfect. They have average just under 2 yellow cards per match; a fitting correlation given the shared feelings of frustration for much of this season. The man in charge of giving the cards is Slovakian referee Ivan Kruzliak. The match will be televised on BT Sport 1 and kicks off at 8:05pm.