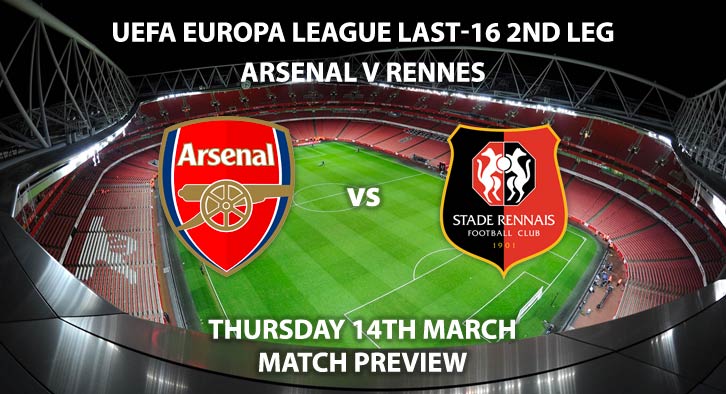 Arsenal are at home to Rennes in the UEFA Europa League as they will look to put right the 3-1 deficit they suffer after the first-leg.

It all seemed to be routine for Arsenal in the first leg as they went 1-0 up early through Alex Iwobi, however a red card for Sokratis saw them crumble. Goals from Benjamin Bourigeaud, Ismaila Sarr and a Monreal own goal saw them fall to the feet of the French side.

Arsenal are heavy favourites for this one with the bookmaker as SkyBet have priced them at 3/10 to win. They are also still in the running to qualify and are priced at 10/11 to reach the next round. Unai Emery’s side have made their home ground a fortress this season and have lost just 2 of 23 matches there. Striker Pierre-Emerick Aubameyang has been enjoying his first season in London and got on the scoresheet in their last outing against Manchester United. He is price boosted to 11/4 to score first.

Many are putting the first-leg down as a blip for the Gunners. Their record in this competition has been impressive as they have kept a clean sheet in six of their last eight Europa League matches. They are 5/4 to win to nil.

Rennes are under dogs for this match and are priced at 17/2 to win at the Emirates Stadium. Rennes will be going to the Emirates knowing if they can hold Arsenal to a clean sheet or just one goal they will progress. They made a great account of themselves last time and midfielder Hatem Ben Arfa caused loads of problems. The trickster is 4/1 to score anytime.

The referee for this match will be Latvian Andris Treimanis. The official could have a lot on his hands after the first-leg antics and with the tie still wide open. Expect cards.

Arsenal vs Rennes will be televised live in the UK on BT Sport 2 and kicks off at 20:00.

7/1 – 2-0 Arsenal – The London sides home form should be enough to see them marginally qualify.

Odds and markets last updated on Thursday 14th March 2019 @18:30 GMT. Keep checking back to see if there’s any updates to markets – the time stamp in the previous sentence for when we update tips on this page will be updated.

Remember to keep visiting the tips and preview area for further updates and betting previews around the weekend’s domestic action.