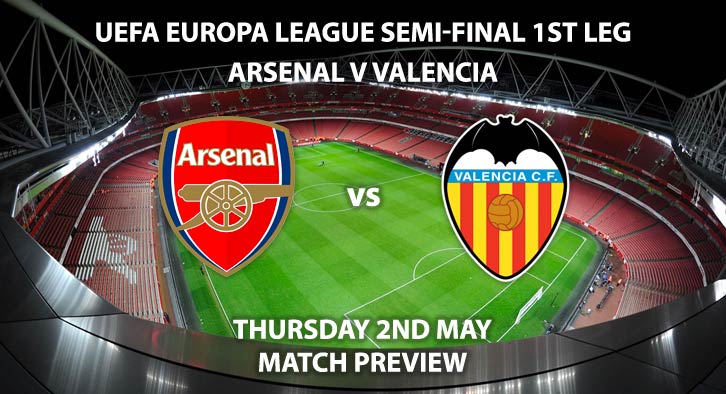 The UEFA Europa League semi-finals are upon us as Arsenal will host Spanish side Valencia in the first-leg of their final four tie.

The hosts defeated tough Italian opposition in Napoli last round but will be hoping their poor domestic form doesn’t affect this Thursday night. Meanwhile, Valencia knocked out rivals Villareal in the last round to make the semi-final stages. They have been seriously impressive in this competition.

Arsenal are favourites to win this match and are priced at 19/20 to win by SkyBet. The gunners have had a number of disappointing results in their bid for a top four spot in the Premier League. However, their home record makes for impressive reading with eight wins from ten matches. Striker Pierre-Emerick Aubameyang has been in great form this season and has four goals in this competition. The Gabon international is priced at 13/10 to sore anytime.

Valencia are underdogs despite how well they have played in the Europa League. SkyBet have priced them at 14/5 to win. Just like their opponents, Valencia have struggled in La Liga in recent weeks but have an impressive record in this competition since dropping out of the UEFA Champions League. Daniel Parejo has two goals from his last four matches and is priced at 7/1 to open the scoring this Thursday. Valencia will fancy their chances against a struggling Arsenal defence. They are 13/2 to win and for both teams to score.

The referee for this match will be Clement Turpin. The French official is renowned for being a no-nonsense referee and often struggles to let the game flow. In both their last outings their matches had 50+ booking points. SkyBet are offering 11/10 for the same again.

Arsenal vs Valencia will be televised live int the UK on BT Sport 2 HD and kicks off at 20:00.

– The home side will want to make sure they don’t concede an away goal. Will be a tight match.

Odds and markets last updated on Thursday 2nd May 2019 @17:18 GMT. Keep checking back to see if there’s any updates to markets – the time stamp in the previous sentence for when we update tips on this page will be updated.

Remember to keep visiting the tips and preview area for further updates and betting previews around tomorrow’s Premier League game between Everton vs Burnley.