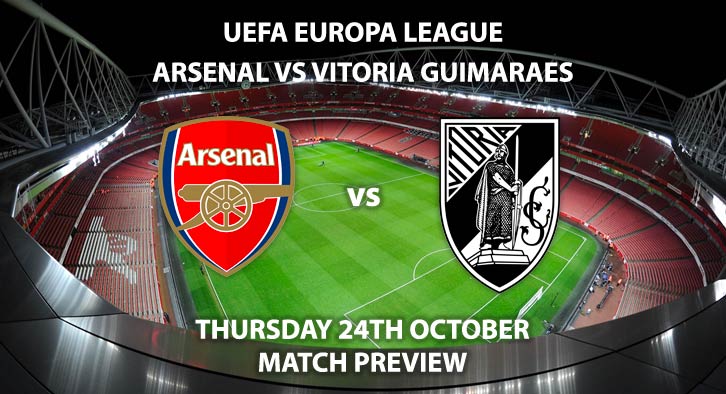 Arsenal return to Europa League action on Thursday night as they face Vitoria Guimaraes at the Emirates on Matchday three in Group F.

Unai Emery’s side will be desperate to return to winning ways following Monday Night’s shock defeat to newly promoted Sheffield United in the Premier League. Lys Mousset’s first half goal was enough for all three points, yet Emery felt his side were in hard luck, despite their unsatisfactory performance.

Their opponents Vitoria Guimaraes currently sit bottom of the pile in Group F, and have lost both their opening two group matches to Frankfurt and Standard Liege. Despite their slow start to the Europa League, Guimaraes have made a promising start to Portugal’s Primeira Liga, where they sit 4th. Ivo Vieira’s side have lost once in their last five in the league, and will be relishing their trip to London, as they look to get points on the board in the Europa League.

Following Monday night’s defeat, Arsenal currently sit 5th in the Premier League, and the defeat to Sheffield United was their first since the 3-1 defeat to Liverpool in August. Beaten by Chelsea in the final of this competition last season, Arsenal will be hoping to go one better this season, as well as secure the luxury of Champions League football which is something they haven’t done since the 2016-17 season.

Unai Emery has demonstrated his trust in youth so often this season, with the real turning point seeming to have come in the 3-0 away win against Frankfurt. Impressively, that was the first time an English side have beaten Frankfurt at home in a European cup competition. Emery started an attacking trio behind Pierre Emerick Aubameyang of Bukayo Saka, Joe Willock and Emile Smith-Rowe, aged 18, 19 and 20. Willock opened the scoring, before Saka grabbed the second late on, securing a good away win for the Gunners. Willock and Saka have a combined 12 PL appearances so far this season (Willock 8, Saka 4), which is more than either managed in the last campaign.

A player who will certainly be relishing this fixture is Vitoria’s Marcus Edwards. Edwards joined the Portuguese side in the summer on a four-year deal from Arsenal’s North London rivals, Tottenham Hotspur. The 20-year old enjoyed a number of battles with Arsenal from U21 to U23 level, and scored and assisted in Spurs’ 3-2 win over Arsenal in 2017.

Thursday nights Europa league fixture is the first time these two sides have ever faced each other.

The referee for this Europa League clash is Serdar Gozubuyuk from the Netherlands. This is the first Europa league match the 33-year old has officiated this season. Gozubuyuk took charge of three Europa League games last season, awarding thirteen yellow cards and one red card in the process. This considered, I would recommend a minimum of 30+ booking points.

This match will be broadcast line on BT Sport 2 with kick-off scheduled to take place at 20:00 BST.