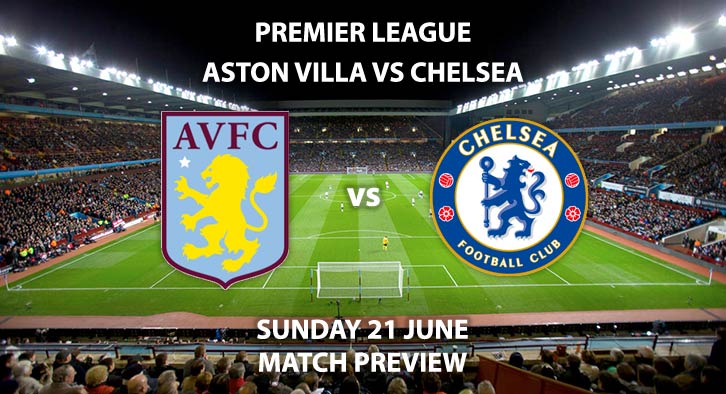 Aston Villa return to Villa Park for the second time in a week when they host Chelsea in the Premier League on Sunday afternoon.

Dean Smith’s side will be hoping to build on Wednesday’s spirited performance where they drew 0-0 with Sheffield United. However, in Villa’s current predicament, the draws need to be turned into wins if they are to beat the drop. Villa are 19th on 26 points, one point from safety.

Chelsea meanwhile hand are hoping to pick up where they left off before the Premier League’s stoppage. Frank Lampard’s side are unbeaten in four matches in all competitions, and thrashed Everton 4-0 at Stamford Bridge in their last Premier League outing.

Chelsea picked up all three points back in December with a 2-1 win thanks to goals from Tammy Abraham and Mason Mount. The English youngsters have enjoyed a promising start to their Premier League careers and are priced at 6/1 on SkyBet to both score on Sunday.

Frank Lampard is new to the managerial world, but he is more than familiar with this weekend’s opponent. In his first season of professional management last season with Derby County, Lampard faced Villa three times and lost all three, including May’s play-off final defeat which sent Villa back to the Premier League.

Olivier Giroud loves playing against Villa. The Frenchman has netted seven goals in eight appearences against them, a run which stretches back to his days with Arsenal. The Frenchman is priced at 11/10 to score anytime on SkyBet.

The man in charge for this one is Paul Tierney. The 39-year old has taken charge of 20 Premier League matches this season, accumulating a total of 58 yellow cards and 3 red cards, an average of just under 3 yellows per game.

Villa’s Douglas Luiz was booked in Wednesday’s stalemate with Sheffield United. The Brazilian has been carded five times in the Premier League this season and is priced at 15/8 on SkyBet to get a sixth this weekend.

This match will be shown live on Sky Sports Main Event/Premier League and kicks off at 16:15 on Sunday afternoon.