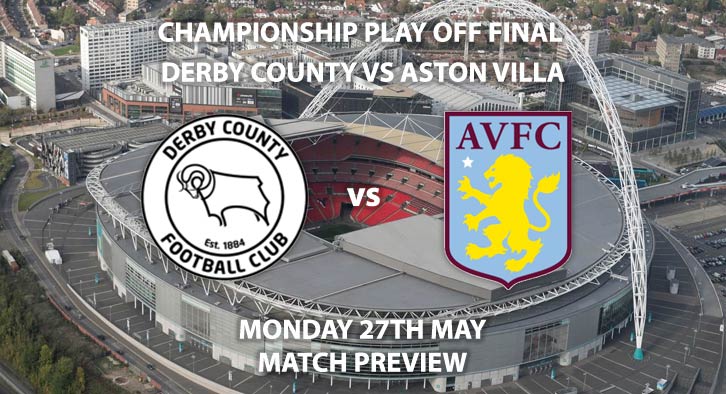 Aston Villa vs Derby County: Aston Villa and Derby County go head to head in ‘the richest game in football’ with a Premier League place and a rumoured windfall of £180m at stake.

Dean Smith’s side enter this game having beaten West Brom in the semi-finals on penalties, after a 2-2 draw on aggregate. Villa’s performance at the Hawthorns wasn’t the best, as they lost 1-0, but they still managed to edge past their West Midlands rivals. Having beaten Derby 3-0 and 4-0 in the league season, they come into this match as favourites. Their hopes of reaching the promised land rest in the hands of their key players, Tammy Abraham, Jack Grealish and Tyrone Mings. Without the trio, Villa would still be languishing in mid-table. They also know that if they fail to secure promotion all three won’t be at the club next year. With Financial Fair Play restrictions looming, Smith would have completely rebuild this side for next season, should they lose.

Frank Lampard’s men come into this game on a high after their phenomenal comeback against Leeds United. Despite tailing the tie 2-0 on aggregate, they came back with three goals in 15 minutes to win 4-2 at Elland Road and progress 4-3. Jack Marriott’s equalised with his first touch before bagging the winner. That brace should earn him a first start in months. If Lampard opts for a 4-4-2 diamond again, which I think he will, eyes will be on whether Martyn Waghorn is fit to join Marriott in attack, or whether Mason Bennett will lead the line.

The narrow system allows the Rams’ key players such as Mason Mount and Duane Holmes to find space between the lines and feed the attackers. Although Derby have lost 7-0 on aggregate over two games with Villa, that was a similar story with Leeds. They won that game, in the most unlikely of circumstance, which shows anything can happen in the play-offs.

This is a really tough game to call. Play-off finals aren’t usually flooded with goals; they can often be tense, nervy affairs. I expect Derby to make things tough for Aston Villa, but I am going to back Smith’s side for a narrow win. Don’t be surprised if this makes it all the way to extra time and even penalties, though.

Aston Villa vs Derby County will be televised live in the UK on Sky Sports Football with kick-off at 15:00 BST.