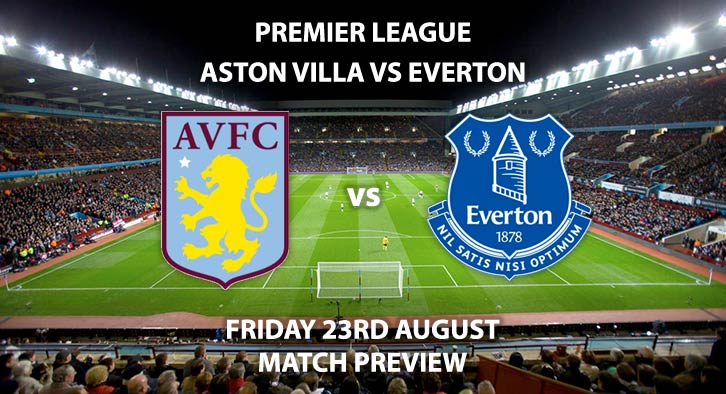 Aston Villa will be looking for their first points of the 2019/20 Premier League season when they host Everton on Friday night.

Dean Smith’s side are yet to get off the mark this season after back-to-back defeats in the opening weeks of the season. On Saturday, they were beaten 2-1 at home by Bournemouth. Having found themselves 2-0 down after 15 minutes at the weekend, Villa battled back strongly but couldn’t get an equaliser. Villa were a little naïve in their approach, something they will need to address sooner rather than later. They can’t afford to give any side a two-goal advantage at this level and expect to get something from the game.

John McGinn’s performances in the opening two matches have caught the eye. The Scottish international’s stock is on the rise after a phenomenal 14 months in the Midlands. He was one of the best players in the Championship last season and has taken to the Premier League like a duck to water. He’s definitely one to watch. Striker Wesley is yet to get off the mark and will need to put that right soon to avoid the crowd getting on his back. Making Villa Park a fortress this season will be vital for Smith’s side, to make sure they stay up. Having lost to Bournemouth this game is a must-not-lose fixture for them.

Everton recorded their first win of the season against Watford at the weekend, thanks to Bernard’s strike. Dominic Calvert-Lewin has led the line in both of their opening league fixtures but keep an eye out for big-money signing Moise Keane, who caught the eye with a late cameo role at Goodison Park. The Italian youngster, signed from Juventus in the summer, has all the attributes to score goals in the Premier League.

Everton have recorded back-to-back clean sheets already this season, which is an improvement on last year. Michael Keane is really stepping up to fill the void left by Phil Jagielka’s departure, alongside Yerry Mina at the back. If the Toffees can keep that consistency in attack, they definitely have the players in attack to trouble most defences in the Premier League

Michael Oliver is the referee for this match. The Englishman racked up an average booking points total of 32.8, across 44 Premier League matches last season. With that in mind, I would recommend a maximum of 50+ booking points for this fixture.

Aston Villa need to get something from this game. After losing at home to Bournemouth, they can’t afford to lose again at home. Everton have been solid if not spectacular at the start of the new campaign. As a result, I’m going for a draw.

Aston Villa vs Everton will be televised live in the UK on Sky Sports Premier League with kick off at 20:00 BST.