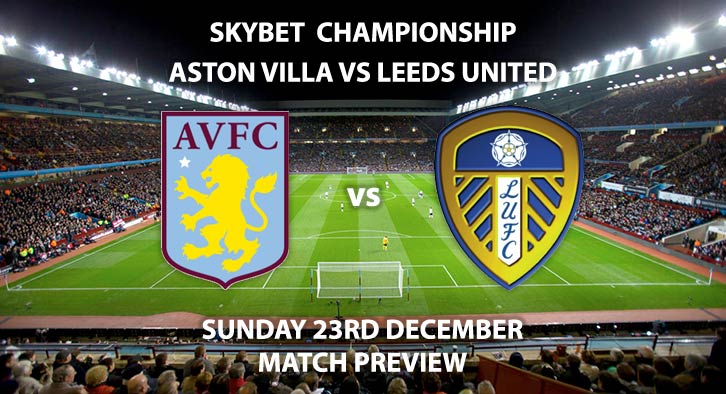 Aston Villa vs Leeds United – the hosts are enjoying a seven-match unbeaten run where they are scoring goals for fun. Meanwhile the visitors have leapfrogged Norwich to the top of the table with 45 points from 22 matches.

Aston Villa are priced at 13/10 to win by SkyBet. As mentioned, the hosts enter this match on a seven-match unbeaten run and are still unbeaten at home under Dean Smith’s management. One player that has shone in recent weeks has been Tammy Abraham. The loanee striker has got 12 goals this season and is in the running for the golden boot. He is priced at (link no longer available) to score first.

Defensively, Villa have struggled to keep many clean sheets this season and have conceded 34 goals in 22 matches. Four of their last five matches have seen both teams score and over 3.5 goals – so it’s safe to say they are an entertaining outfit. For over 3.5 goals on Sunday, SkyBet are paying out at 13/8.

Current league leaders Leeds are priced at (link no longer available) to end Villa’s impressive run. Their five consecutive wins have seen them finally take over Norwich for top spot. Their ability to hold a lead is impressive however they don’t often beat teams by more than one or two goals. They have multiple players responsible for scoring however Kemar Roofe has been the most prolific with 10 goals. He is (link no longer available) to score anytime.

Leeds impressive season has not seen many blunders on the road with 21 points picked up from 11 away matches. Their last two matches have seen them win to nil, but that will prove a much harder task against the league’s second highest scorers. They are priced at 7/2 to win and both teams to score.

The referee for this match will be Andrew Madley. The official has averaged a total of 27.5 booking points from his 14 Championship matches.

Aston Villa vs Leeds United will be televised on Sky Sports Football HD and kicks off at 13:30.

It’s too tough to split these sides but I can definitely see goals being scored.