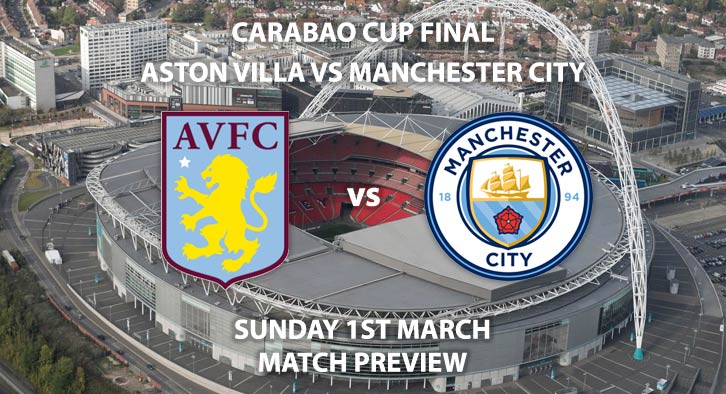 Aston Villa and Manchester City battle it out for this year’s Carabao Cup at Wembley on Sunday afternoon.

Many predict this as a ‘David v Goliath’ clash considering these two sides’ league form and ranking, but 90 minutes is the only thing separating the sides from cup glory. Manchester City are 2nd in this seasons Premier League table, meanwhile Villa fin themselves struggling in 17th, one place and one point above the relegation zone.

Pep Guardiola’s side are looking to make it four final fins out of the last five following their previous triumphs in 2016, 2018 and 2019. A win on Sunday would see them secure the Carabao Cup for the third time in a row.

Aston Villa are the fourth most decorated club in this cup competition with five wins, one behind Manchester City. Villa’s last win came in 1996 when they defeated Leeds United 3-0 at Wembley. Villa featured in the first ever final of this competition in 1961, where finals were played over two legs, home and away. They were 3-2 winners over Rotherham over the two legs, thanks to their 3-0 win at Villa Park which secured the cup.

Manchester City have won both meetings between these two sides in the Premier League this season by an aggregate scoreline of 9-1. City were 3-0 winners at the Etihad in March, and most recently dismantled Villa 6-1 at Villa Park in January. Even the most optimistic of Villa fans could predict their side getting their hands on the trophy this year… could they?

Pep Guardiola’s side have won seven of the last eight meetings in this fixture and are unbeaten against Villa since September 2013.

The referee for this final is Lee Mason. The 48-year old is taking charge of his first final, and his fourth match of this seasons Carabao Cup. Sunday will be the second time Mason has taken charge of City in this years competition, and the fourth time he has overseen Villa in this year’s cup.

In the three Carabao cup matches Mason has taken charge of, to say he has been lenient is an understatement. Three yellow cards have been awarded in his three matches. For this fixture, I would recommend a minimum of 20+ booking points.

Aston Villa vs Manchester City will be televised live in the UK on Sky Sports Main Event HD with kick off at 16:30 GMT.