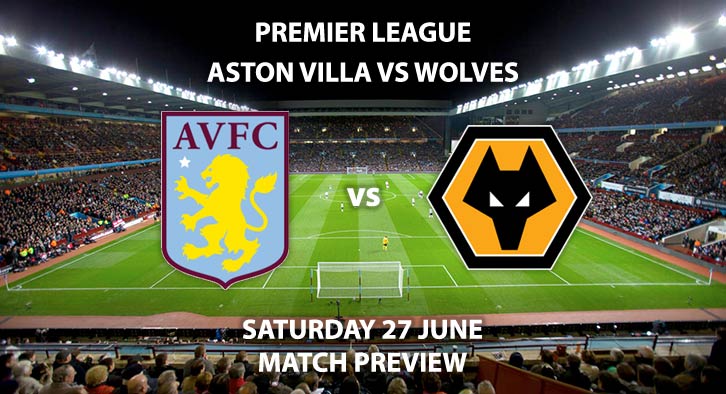 Aston Villa return to Villa Park when they host Midland’s rivals Wolves in the Premier League on Saturday lunchtime.

Since the Premier Leagues return the form of these two sides couldn’t be too much more of a contrast. Villa have failed to win any of their three matches since the resumption (D2 L1) meanwhile their counterparts Wolves have won both of their encounters ad they chase down a Champions League spot.

Dean Smith’s side are 19th in the division and are one of three teams on 27 points, attempting to avoid relegation. Villa are 7 without a win in the league, with their last triumph coming at the end pf January. It’s testing times if you’re from a Villa persuasion.

Wolves meanwhile are going from strength to strength and are just two points behind Chelsea in 4th. Nuno Espirito Santo’s side are unbeaten in 7 in the league and have won four of their last five.

Wolves ran out 2-1 winners in the reverse fixture back in November thanks to goals from Ruben Neves and Raul Jimenez. The Mexican has scored in both of his appearances since the leagues resumption, and 14 times in total this season. He is priced at 23/20 to score anytime in this one.

Villa have won 2 of the last 3 meetings in this fixture, with Wolves claiming the other win. In each of the last 3, BTTS has landed. Wolves to win and BTTS is priced at 3/1 on SkyBet.

Craig Pawson is the man in charge of this one. The 41-year old has taken charge of 17 Premier League affairs this season, brandishing 68 yellow cards and 2 red cards. November’s meeting between these two produced 7 yellow cards; I would recommend a minimum of 40+ booking points for this one.

Wolves’ Joao Moutinho has been booked in his last two Premier League appearances and was yellow carded back in Novembers meeting. The Portuguese is priced at 10/3 to be booked in 90 mins on Bet365.

This match will be televised live on BT Sport 1 with kick off scheduled to take place at 12:30 today.