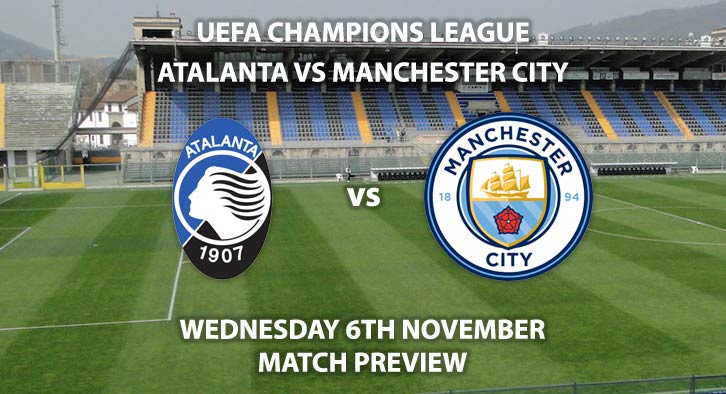 Manchester City return to Champions League action on Wednesday night, as they travel to Italy to face Atalanta.

Pep Guardiola’s side head into Wednesday night’s Group C clash top of the pile, with a 100% record thus far with three wins from three.

Their opponents Atalanta enter this fixture heavy underdogs, and currently sit bottom of group C, after losing all of their opening three ground matches.

Atalanta enter this week’s clash off the back of a disappointing Serie A defeat at the weekend. They were beaten 2-0 at home to Cagliari and slipped to fifth in the table. To add insult to injury Midfielder Josip Ilicic was given his marching orders on 39 minutes, which made their task even harder. Atalanta will be keen to return to winning ways at the earliest possible opportunity.

By Pep Guardiola’s pristine standards, his sides opening to the Champions League has been up to scratch, but their Premier League exploits have been off the mark. They currently trail Jurgen Klopp’s Liverpool side by six points and have lost twice already in the league (Norwich A, Wolves H). They travel to Anfield this Sunday, and despite the season only being twelve games old, the result could answer a lot of questions concerning both sides title winning credentials.

Wednesday night’s encounter is the reverse fixture against City, and the Italian side will be hoping for a much more positive outcome than two weeks ago. Gian Piero Gasperini’s side we’re hammered 5-1 by Pep Guardiola’s side, with City forward Raheem Sterling netting a hat-trick. The only down side for the Citizens was the red card for youngster Phil Foden, who misses this week’s match up through suspension.

Atalanta have enjoyed various triumphs concerning European Cup competitions in the past, but this season is their first in the UEFA Champions League. The Italian side did win the European Cup Winners Cup in the 1963/64 season, so will be hoping to rediscover their European successes of yesteryear to revive their Champions league longevity this season. And what better way to do it by beating the current Champions of England, and this year’s favourites for the Champions League.

This match will be shown live on BT Sport 3 on Wednesday night, with kick off scheduled to take place at 20:00 GMT. Don’t forget to check out our tips and preview page for more betting tips for Wednesday’s European action.