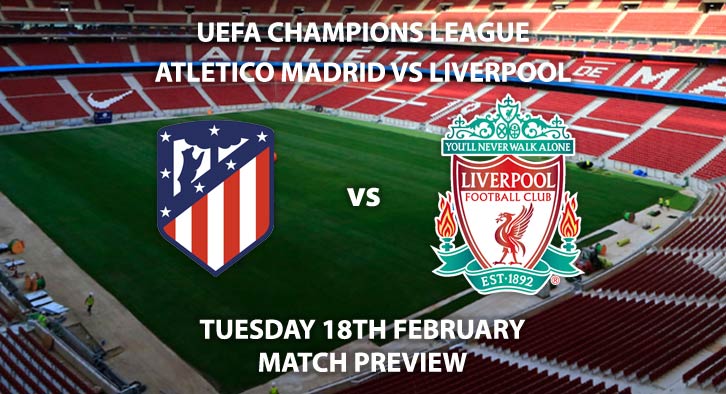 Atletico Madrid and Liverpool lock horns in the first leg of their Champions League round of 16 tie on Tuesday night.

The Reds travel back to the ground where they claimed their sixth European Cup in June. They defeated Tottenham 2-0 at the Wanda Metropolitano, a memory that is still fresh in the minds of Kopites around the globe.

The hosts Atletico Madrid are, in fairness, in a poor run of form having won only one of their last seven encounters in all competitions. Diego Simeone’s side have won only three times in all competitions this year and sit fourth in Spain’s La Liga. Atletico were held by Valencia at the weekend, drawing 2-2 at the Mestalla.

Liverpool on the other hand are cruising to their first English League title in thirty years, and sit top of the Premier League with an incredible twenty-five point gap between themselves and 2nd placed Manchester City. Sadio Mane was the matchwinner in their latest Premier League game, he struck in the closing stages to secure a 1-0 victory away to Norwich.

Diego Simeone’s side finished second in group D behind Italian giants Juventus. Atletico did however lose two of their six group matches, but are still unbeaten in this years competition on home soil.

Liverpool finish top of group E where they won four of the six group matches, losing one and drawing the other. Liverpool’s defeat came in the opening group match away to Napoli where they lost 2-0.

These two sides last met in 2010 in the semi-final stage of the Europa league. The match finished 2-2, but Atletico progressed to the final on the away goals rule. Tuesday night’s meeting id the fifth time these two sides have met in Europe.

The referee for this encounter is Szymon Marciniak. The Polish official has taken charge of three matches thus far, and has awarded ten yellow cards. This considered, I would recommend a minimum of 30+ booking points for this clash. Marciniak took charge of Liverpool’s 2-1 defeat away to PSG in last season’s Champions’ League group stage, and awarded eight yellow cards.

Atletico Madrid vs Liverpool will be televised live in the UK on BT Sport 2 with kick-off at 20:00 GMT.