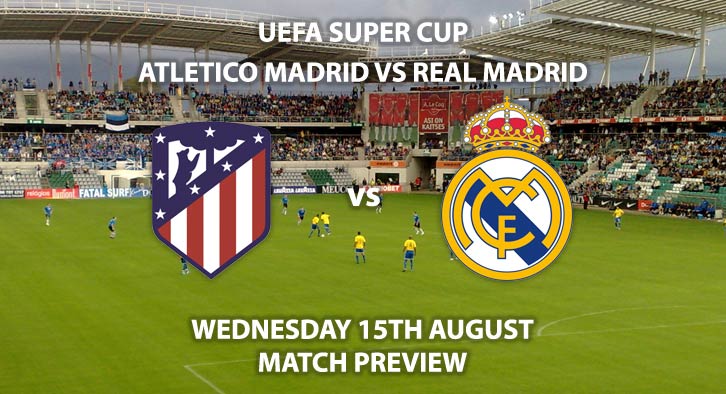 Atletico Madrid vs Real Madrid – The city of Madrid showcases its footballing superiority as local rivals Atletico Madrid and Real face off in the UEFA Super Cup Final at the Lillekula Stadium in Estonia.

Obviously, both sides have the opportunity to compete for the season’s first trophy due to successes last season. A Gareth Bale inspired Real Madrid saw off Liverpool to claim a third Champions League title in succession. Exerting complete dominance over the contemporary game whilst doing so.

Atleti put their poor Champions League group stage to bed by comfortably winning the Europa League. Arsenal were bested in the semi-finals before a crushing 3-0 victory over Marseille in the final.

With Zinedine Zidane and Cristiano Ronaldo’s departure, Real Madrid now enter a new era under former Spain boss Julen Lopetegui. Sending a message and beating your rivals in the first competitive game of the campaign would be the ideal start.

Synonymous with the club, Diego Simeone wants to take every possible chance to get one over on Atleti’s fierce rivals. With previous shortcomings in Europe in this very fixture, (two Champions League Final defeats in 2014 and 2016) there will always be a lust for revenge.

The UEFA Super Cup undoubtedly isn’t a competition of the same prestige. However, the Madrid Derby is always an incredibly feisty affair with two clubs constantly desperate to win everything possible.

Both clubs were involved in substantial transfer business this summer, for differing reasons. Atleti manged to hold on to prized star and World Cup winner Antoine Griezmann. Los Blancos signed Thibaut Courtois on deadline day, amongst slight controversy, but as mentioned above lost star Ronaldo.

In the 195th Madrid derby, two of the best teams on the planet will compete for a European trophy. What’s not to love? Football is back.

Atletico Madrid vs Real Madrid will be televised live in the UK on BT Sport 2 with kick-off at 20:00 GMT.

Odds and markets last updated on Tuesday 14th August 2018 @22:15 GMT. Markets maybe updated prior to kick off so keep checking back – we will update the time for when the tips were last updated when doing so.