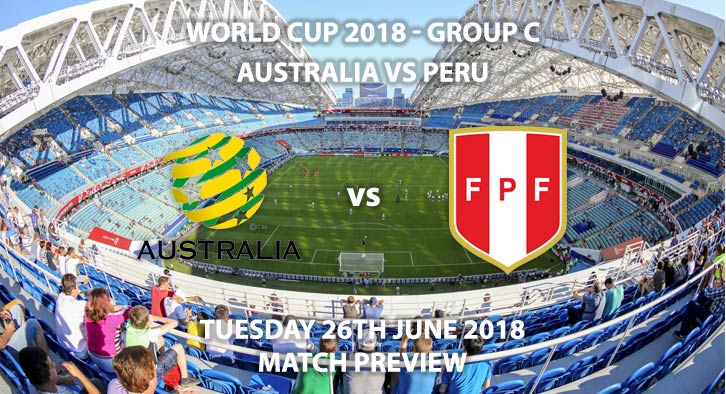 Australia vs Peru. Australia head into their final group game against Peru knowing they must win to have any hope of qualifying for the round of 16.

After collecting just one point from their first two fixtures, Australia need three points to save their flailing hopes of qualifying. Last time out they battled back to draw 1-1 with Denmark, a point that kept alive their World Cup hopes. They now must beat Peru, and hope that France beat Denmark, which would leave both sides tied on four points – leaving second spot coming down to goal difference. Australia have battled impressively in both games, making up for what they lack in prowess with physical endeavour.

However, they can pose a threat to sides and have a number of important players. Aaron Mooy and Mile Jedinak are both vital in midfield; the Aston Villa man has scored both of their goals from 12 yards. In attack, Mathew Leckie has caught the eye, in addition to teenage-sensation Daniel Arzani. The 19-year-old winger has been dubbed as the best talent to come out of Australia since Harry Kewell and scored three goals in his breakthrough season with Melbourne City.

Peru have brought life and soul to the competition. Their 15,000 fans, celebrating their first World Cup since 1982, have brought a carnival atmosphere to Russia. Sadly, their team haven’t delivered on the field which has consequently left them bottom of Group C after two defeats. They are now out of the World Cup, but will be hoping to give their fans one last hurrah in this match. They were narrowly beaten 1-0 by France last time out, which condemned them to their fate. Like a few smaller nations, their build-up play is easy on the eye, but they lack a killer instinct infront of goal. Still, with one game left, they will want to try and register a point on the board, or at least find the back of the net.

Sergey Karasev is the referee for this game. The Russian official has averaged 3.43 yellow and 0.22 red cars in 79 international matches. With that in mind, I would recommend a maximum of 30+ match booking points.

This game won’t be a thriller, with both sides yet to score from open play. Australia lack quality for all their industry, whilst Peru lack a goalscorer. This could be the first blank of the tournament.

Australia vs Peru will be televised live in the UK on ITV 4 with kick-off at 15:00 GMT.

Tips updated at 13:30 GMT on 25th June 2018. Markets will be updated again prior to kick-off so keeping checking this page back.