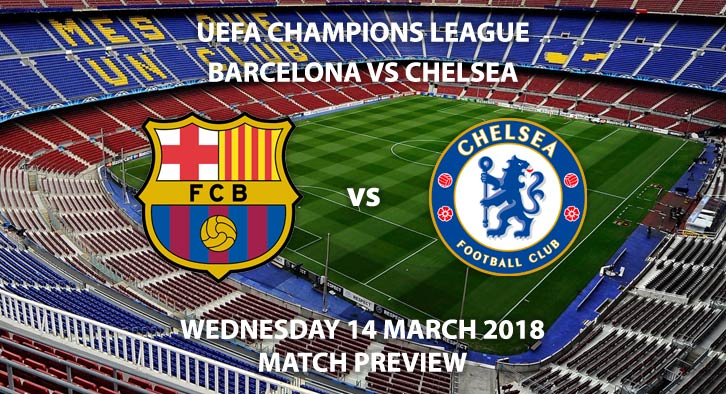 Barcelona vs Chelsea – It’s the second leg of arguably the closest tie of the Champions League round of 16. Chelsea will travel to Catalonia to face La Liga leaders Barcelona following their 1-1 draw in the first leg at Stamford Bridge.

The first leg was a tighter encounter than many expected, with Chelsea possessing a much more potent attacking prowess than their recent domestic form would suggest. Brazilian winger Willian was like a man possessed last time out. However, his goal was cancelled out by Lionel Messi.

Wednesday’s hosts are currently first in La Liga and haven’t lost since 17th January. Their last outing saw them put two past bottom of the table, Malaga. Amazingly, Barcelona have managed to score two or more in 78% of their La Liga matches this season. With an attacking line-up consisting of Luis Suarez, Lionel Messi, Philippe Coutinho and Ousmane Dembele, you can see why they are so prolific.

Defensively, the Catalonian outfit have also proved their tactical understanding with a clean sheet in 60% of all their league matches. They have only conceded 13 goals all season in their 28 matches. This defensive superiority has transferred to their Champions League campaign seamlessly. In the group stages they only managed to concede once in their six outings. They’re favourites for this one and with good reason.

The visitors are currently fifth in the Premier League following a bad run of form. Their most recent match saw them narrowly defeat relegation strugglers Crystal Palace however their torrid form during February seems to have still had a knock-on effect. The main positive for Chelsea to take is that their performance in the first leg was very positive and many of their out of form players stepped up. Willian was a pleasure to watch as he hit the woodwork twice before scoring a delightful goal. The Brazilian is part of an attack that has managed to score twice or more in 50% of their Premier League matches. Eden Hazard will also be a key figure to look out for.

Chelsea’s defence will have a great task ahead of them to silence the aforementioned world class attackers that Barcelona possess. They have defended admirably this season with a clean sheet in 46% of their league matches. They have only conceded 27 goals in their 30 Premier League matches.

Barcelona vs Chelsea will be televised live on BT Sport 2 and kicks-off at 19:45.

Keep visiting the tips and preview area for further updates and betting previews for more previews from this weeks domestic cup action and remainder European fixtures.