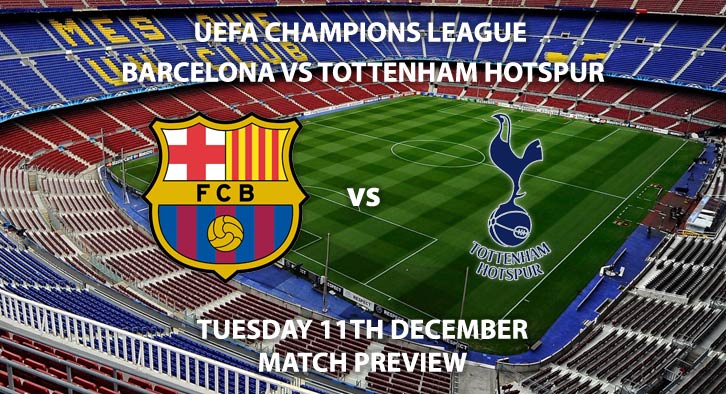 The hosts have already qualified for the knockout stages after topping Group B. Meanwhile, Tottenham are still in the mix to qualify, however have a tough test to turn over the La Liga leaders and will hope Inter Milan fall short against PSV in the groups other match.

Barcelona are priced at 11/10 to win by SkyBet. Having already achieved qualification to the knockout stages, it is unsure whether Barcelona will line up with their strongest eleven. They enter this match on a four-match winning streak and as ever, Lionel Messi has been amongst the action. The Argentinian is the competitions top scorer with six goals in five games. He is priced at 10/3 to score first. Messi is also joined by Luis Suarez in attack who has been very prominent this season in La Liga and has 10 league goals. He is 4/1 to break the deadlock.

They boast the best defence in Group B with just 4 goals conceded in 5 matches. The Catalan club are priced at 7/2 to win to nil however Harry Kane will be a dangerous threat to their defence.

Tottenham are priced at 2/1 to achieve a famous victory. Spurs have been in some awesome form recently with 8 wins from their last 9 matches in all competition. Harry Kane has of course been the main man and has four goals in five games in this competition. The England captain will lead the line for the visitors and is 1/1 to score anytime. He is fortunate enough to play with Christian Eriksen and Dele Alli behind him. Both attacking midfielders thrive in big games situations. Eriksen is always a danger from set-pieces and is 9/1 to score outside the area.

Despite sitting second in the group, Spurs will need this match and the other result to go in their favour if they are to qualify for the knockout stages. They have not been at their best in this competition and have conceded 9 goals from 5 games. Four of those goals came from their previous meeting with Barcelona. For Spurs to win and both teams to score, SkyBet are offering odds of 7/2.

The referee for this match will be Mirolad Mazic.

Barcelona vs Tottenham will be televised BT Sport 3 and kicks off at 20:00.

– Whilst Barcelona may not field their strongest team, Spurs have not shown enough character throughout the group stages.

Odds and markets last updated on Tuesday 11th December 2018 @18:54 GMT. Keep checking back to see if there’s any updates to markets – the time stamp in the previous sentence for when we update tips on this page will be updated.