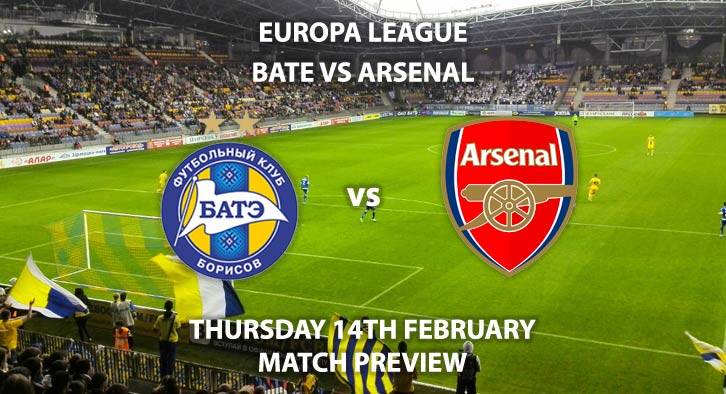 BATE Borisov vs Arsenal: Arsenal will be hoping to boost their chances of Champions League football with a strong first-leg performance against BATE Borisov in the Europa League round of 32.

The Gunners moved above Chelsea on goal difference at the weekend, after a 2-1 win over Huddersfield Town. Alex Iwobi and Alexandre Lacazette grabbed the goals to ensure a third win in six games. It was Arsenal’s first away win in the Premier League since November, which underlines their recent struggles on the road. Saturday’s win did leave Unai Emery’s side without a clean sheet in four matches – they haven’t kept one away from home in the league all season. Although Arsenal are only one point behind Manchester United, it appears that the Europa League could be the best route into the Champions League for them and Chelsea. It worked for Manchester United two years ago and could be a good avenue for Emery to explore.

BATE fell to defeat against Arsenal twice in last season’s Europa League group stages. The Gunners came out 6-0 and 4-2 winners last time around. Former midfielder Aleksandr Hleb will be hoping to face his former club, whilst Bojan Dubajic, Nemanja Milic and Dmitri Bessmertny could be in line for competitive debuts after joining in January.

BATE have not played a competitive match since their last Europa League game against PAOK which saw them finish behind Chelsea in Group L. They have never reached beyond this stage of the competition, and a lack of domestic football between December and April will not boost their hopes of progressing through this tie.

Srdjan Jovanovic is the referee for this game. The Serbian official has an average booking points total of 45.1 based on his last 32 games. Therefore, I would advise a maximum of 60+ total points for this game.

Arsenal are clearly strong favourites to win this tie. They appear to be the kings of ‘both teams to score’, and that would be my bet here. I’d definitely go with the Gunners, though – how many is the biggest question.

BATE Borisov vs Arsenal will be televised on BT Sport 2 and kicks off at the slightly earlier time of 17:55.

– The visitors are far too strong a side. Home advantage shouldn’t play a factor.

Odds and markets last updated on Thursday 14th February 2018 @17:10 GMT. Keep checking back to see if there’s any updates to markets – the time stamp in the previous sentence for when we update tips on this page will be updated.