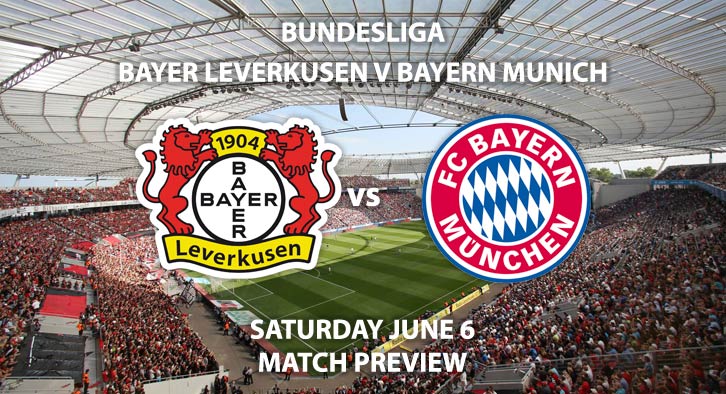 The pick of this weeks Bundesliga action comes from the Bay Arena as Bayer Leverkusen host Bayern Munich on Saturday afternoon.

It’s runaway leaders versus Champions League hopefuls in this one, with both hoping this unique season can be one topped off with success. Leverkusen sit 5th on 56 points, level on points with Borussia Monchengladbach and two behind RB Leipzig in 3rd. Pater Bosz’s side have lost one of their four matches since the Bundesliga’s return, winning the other three including last weekends 1-0 triumph away to SC Freiburg.

The superlatives are running out to describe this Bayern Munich juggernaut which is blitzing its way through Germany’s top-flight. The Bavarians are well on their way to making it eight consecutive Bundesliga titles, and have a healthy seven-point cushion between themselves and closest challengers Borussia Dortmund. Hans-Dieter Flick’s side have won all four matches since their return, scoring thirteen and more impressively, conceding only two.

Leverkusen’s solid form has them in good stead ahead of this one. SkyBet have priced them at 5/1 to take all three points on Saturday.

Leverkusen’s win in November is their only win in the last five meetings in this fixture, with Bayern coming out on top in the other four. However, BTTS has landed in each of the last five encounters and is priced at 4/9 on SkyBet.

Leverkusen’s Moussa Diaby has been yellow carded in two of his last three Bundesliga appearances and is priced at 5/1 to be booked in this one. In the reverse fixture there were four yellow cards awarded and 40+ booking points is priced at 8/13 on SkyBet this time round.

This match will be televised live on BT Sport 1, with kick-off scheduled for 14:30 BST on Saturday afternoon.