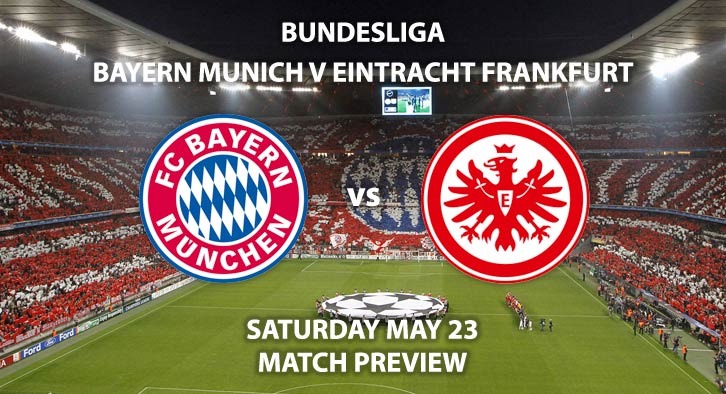 Bayern Munich return to the Allianz arena for the first time in over two months as they host Eintracht Frankfurt in the Bundesliga on Saturday afternoon.

The Bundesliga leaders made it a winning return to action last weekend with a comfortable 2-0 win over Union Berlin. Last weekends win made it eleven wins from Bayern’s last twelve as their surge for an eighth consecutive Bundesliga title continues.

Frankfurt meanwhile suffered a miserable return to Bundesliga life and were beaten 3-1 at home to Borussia Monchengladbach. Last weekends loss made it four consecutive defeats in the league. Frankfurt’s last win came back in February.

If recent form in this fixture it anything to go by then it seems Frankfurt’s wait for a Bundesliga win will go beyond this weekend. They have lost each of their last ten trips to the Allianz Arena, and to make matters worse they have the worst away record in the Bundesliga this campaign. But, there may be some hope, however little. Frankfurt were the team who ended Nico Kovac’s wretched reign in the Bayern hot-seat following a 5-1 thumping back in November.

Robert Lewandowski made it twenty-six goals this season with a first-half penalty against Union Berlin last weekend, and the Polish striker sits top of the Bundesliga goalscoring chart with a five-goal advantage over RB Leipzig’s Timo Werner. Lewandowski scored what proved to be a consolation for Bayern in the earlier meeting this season and is priced at 9/5 to score first on Saturday evening.

Stefan Ilsanker was carded in Frankfurt’s defeat to Monchengladbach last weekend, and the Austrian has been yellow carded in two of his five Bundesliga appearances this season. SkyBet are offering odds of 12/5 for Ilsanker to be carded in this one.

Bayern’s Jerome Boateng saw red after only nine minutes in the reverse fixture, and the German has been carded in five of his seventeen matches this season. Boateng to be carded in this one is priced at 12/5 on SkyBet.