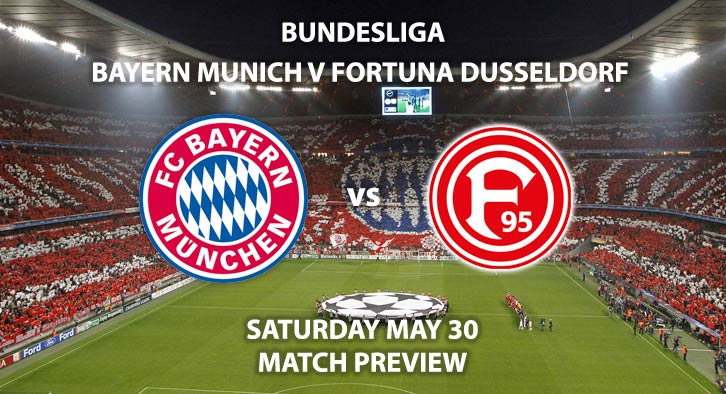 Following Tuesday night’s Der Klassiker victory over closest rivals Borussia Dortmund, Bayern now have a healthy seven-point lead at the top of the Bundesliga, and look set to make it eight consecutive league titles. A win for Hans Dieter-Flick’s side on Saturday would open up a ten-point gap over Dortmund, who don’t play until Sunday afternoon.

The visitors Fortuna Dusseldorf sit precariously above the relegation zone and occupy the play-off place in 16th. Uwe Rossler’s side are currently on a six-match unbeaten run which stretches back to the middle of February. Since the league’s resumption, Dusseldorf have drawn two and won one.

Bayern Munich have won their last seven consecutive Bundesliga encounters and are unbeaten in their last fourteen.

Dusseldorf have the second highest number of draws this season with nine and six of these draws have come in their last nine encounters. For those optimists, a draw is priced at 8/1 on SkyBet.

This fixture has been one of the more exciting affairs in the Bundesliga in recent years. Twenty goals have been scored in just the last five meetings between these two sides, with Bayern winning four out of five. Over 3.5 goals is priced at 11/8 on SkyBet. Bayern ran out 4-0 winners in the reverse fixture back in November.

Serge Gnabry has netted in both of his appearances against Fortuna Dusseldorf and is priced at 5/6 to score anytime on Saturday evening.

Kaan Ahyen is second placed in the disciplinary proceedings this season, with ten yellow cards in his twenty-five appearances this season. The Dusseldorf defender is priced at 6/5 on BET365 to be carded anytime on Saturday. Additionally, Marcel Sobottka has been carded in his last two encounters. Both Ahyen and Sobottka to be carded is priced at 15/2 on BET365.

This match will be televised live on BT Sport 1 HD with kick-off at 17:30 BST on Saturday evening.