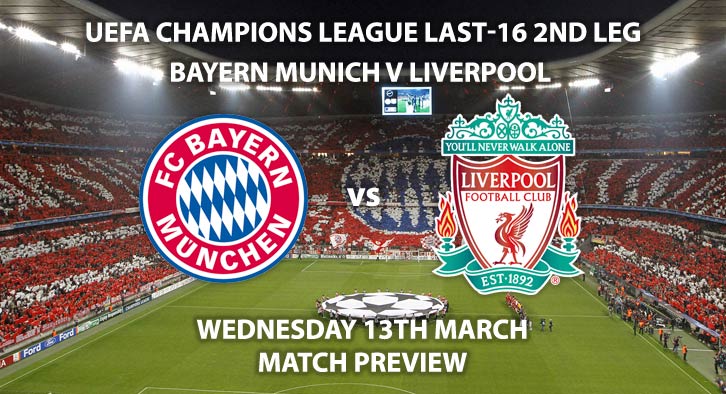 Bayern Munich vs Liverpool: Last year’s finalists Liverpool head to the Allianz Arena hoping to cause an upset against Bayern Munich in a finely-poised knockout tie.

The Reds have dipped in form recently, which has allowed Manchester City to steal the march on them in the race for the title. It’s been a tough run for Liverpool, who have dropped six points in their last six games. They held a seven-point cushion in December but the pressure seems to have told. They were back to winning ways on Sunday, though, battling back from behind to beat Burnley 4-2. It was a much-needed brace for the returning Roberto Firmino, making his first start in a fortnight after injury. Sadio Mane also continued his fine form with a double, taking his tally for the season to 17. If Jurgen Klopp’s side are to get any joy in Germany, they will need their front three to be on the ball. If they can roll back a year to the swift counter-attacking side we saw last season, they could cause Bayern some real issues on the break.

Bayern will be hoping to make the most of home advantage, with the score at 0-0. Since that draw, Niko Kovac’s side have won all three of their league games, scoring 12 times and conceding once. Those results have seen them recover their deficit in the Bundesliga title race, much as City have in England. Robert Lewandowski notched a brace in their 6-0 mauling of Wolfsburg on Saturday. The Pole has four goals in his last two games and 29 for the season. In this vein of form, he is one of the best number nine’s in Europe, so Liverpool will have to be on guard against him. The battle between Lewandowski and Virgil van Dijk could well decide this tie.

Daniele Orsato is the referee for this game. The Italian official plies his trade in Serie A. He has averaged 5.77 cards per game, across 14 league matches this season. Therefore, I would advise a maximum of 60+ booking points, for this fixture.

This is such a tough game to call. My gut is telling me that Liverpool’s pace on the break could be a defining factor, as Bayern will try and dominate possession. This game could go either way, but I’m going to back the Reds on away goals.

Bayern Munich vs Liverpool will be televised live in the UK on BT Sport 2 with kick off at 20:00 GMT.

There’s a few more RequestABet picks than usual – our recommendation is to cover the correct score, NAP and Next Best (NB) picks and then a further 3 bigger odd RequestABets listed.

Odds and markets last updated on Wednesday 13th March 2019 @18:18 GMT. Keep checking back to see if there’s any updates to markets – the time stamp in the previous sentence for when we update tips on this page will be updated.