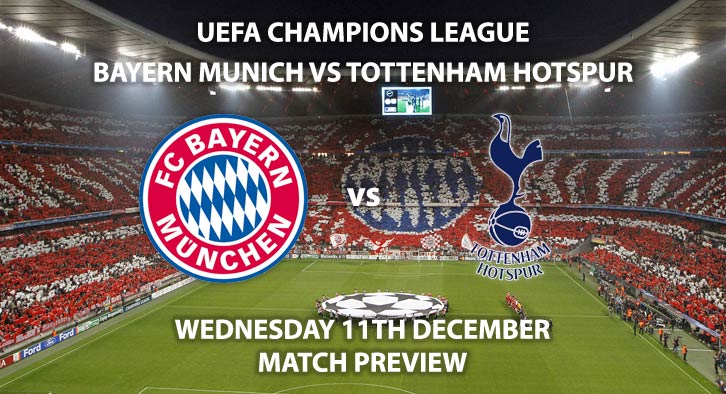 Bayern have already been confirmed as group winners, but a win on Wednesday will feel even sweeter as it will ensure maximum points from the group. Interim boss Hans-Dieter Flick has seen his side win five out of five so far.

If Bayern do pick up six wins from six, they will be the sixth club to do so, and the first since Real Madrid in the 2014/15 season.

Spurs are too already through to the last sixteen phase, but will be out for redemption in this fixture, following their 7-2 embarrassment to Bayern earlier on in the group.

Bayern are enduring an out of sorts campaign thus far in the Bundesliga, where they currently sit 7th. The Bavarians have won only seven of their fourteen league matches and find themselves already seven points behind leaders Monchengladbach. Bayern’s poor form this season has already seen the dismissal of former boss Niko Kovac, who was sacked in November.

Spurs come into this clash following their weekend thumping of Burnley in the Premier League. Jose Mourinho’s side were 5-0 winners, and forward Son Hyeung-Min scored an early contender for goal of the season.

Jose Mourinho kicked his Champions League tenure with Spurs with a win over Olympiakos. Mourinho saw his side two down after twenty minutes, but a double from Harry Kane along with goals from Dele Alli and Serge Aurier saw Spurs come away with all three points, and secure qualification to the last sixteen with a game to spare.

The referee for this fixture is Gianluca Rocchi. The Italian has taken charge of two Champions league matches so far this season, awarding seven yellow cards, and two red cards. This considered I would recommend a minimum of 30+ booking points for this fixture. The 46-year old took charge of Spurs’ opening group match stalemate with Olympiakos, where he awarded two yellow cards.

This match will be shown live on BT Sport 2 with kick-off scheduled to take place at 20:00 GMT.