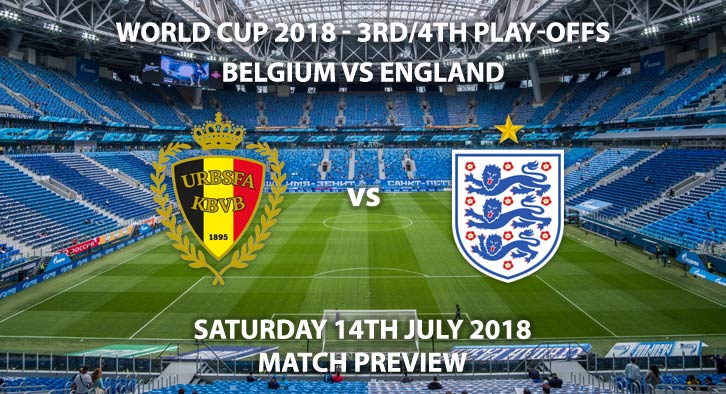 Belgium vs England – After falling agonisingly short of glory in the semi-finals, Belgium and England will contest the World Cup Third Place Play-Off.

In arguably the most important game in football that neither side wants to play, memories of the defeat just one step away from the World Cup Final will inevitably plague both sides. The deflation of being eliminated in the semi-finals makes it hard to re-motivate for a match that pales in comparison of significance.

Whilst sharing the disappointment, the two nations will reflect on the tournament much differently. Gareth Southgate’s young England team far surpassed all expectations and enchanted the hearts of a nation. A favourable run-in yes, but this was an outrageously unpredictable tournament.

Teams like Germany and Spain were unable to string wins together against ‘smaller’ nations. England should be proud of their achievements, the team has undoubtedly progressed throughout the tournament. Croatia just proved one step too far, losing 2-1 in extra time.

That feels like a large contrast for Belgium’s ‘Golden Generation’. A hefty tag to live up to always, but with that crop of talent it seemed this was the opportunity. World-class talents like Kevin De Bruyne, Eden Hazard and Romelu Lukaku saw the Red Devils as a pre-tournament favourite.

Beating England, a comeback victory against Japan and then besting Brazil all portrayed positive signs. However, a resilient French display saw the golden generation crash out 1-0, dreams of meeting expectations flittered away. Roberto Martinez may have a lot to answer for upon returning home.

So the small matter of the Third Place Play-Off is where it currently stands. To say you are the third best team in the world is a huge accomplishment. It’s just a shame it will be the second ‘meaningless’ game these two sides have played just in this tournament. Third place will be Belgium’s best-ever finish at the World Cup, or England’s best after the 1966 win. Claiming third will allow the victors to leave on somewhat of a high.

The golden boot is still also in contention. Barring something miraculous, it will go to either Harry Kane or Romelu Lukaku. The Spurs hitman has six strikes so far, but Lukaku has four and one more assist (one) so a brace could see him take the title. A stellar World Cup for both, who have proven their status among elite strikers.

With the pure exhaustion experienced last time out, expect wholesale changes to be made for this one. Especially in England’s case after their gruelling extra-time laden semi-final. Nonetheless, this match at the World Cup tends to produce goals as both sides open themselves up more. Hopefully the same will happen, dependant on whether the high-quality forwards on both teams turn up.

England and Belgium can both look back on the 2018 World Cup with a lot of pride. But for the next four years there will always be that lingering question, what if?

Keep visiting Tips and Previews ahead of games to get our suggested tips and correct score picks for the remainders final on Sunday. Tips updated at 17:08 GMT on 13th July 2018.