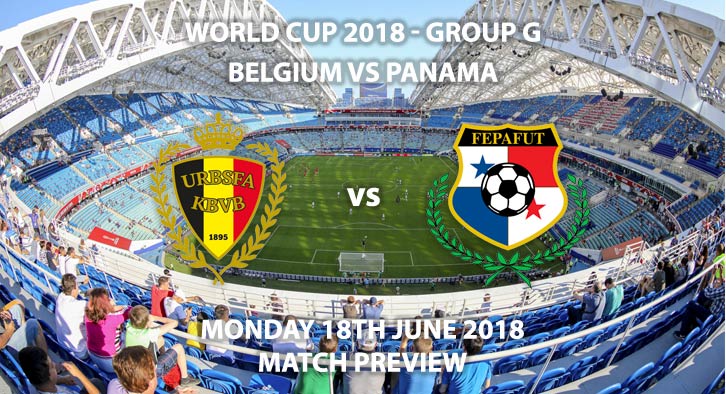 Belgium vs Panama – Belgium will be hoping to remove their tag as ‘dark horses’ by announcing themselves on the world stage when they kick off their campaign against Panama.

In the last two major tournaments, Belgium have been tagged as everyone’s ‘wildcard’. With the talent within their squad, it’s time for them to come of age. Kevin De Bruyne, Eden Hazard and Romelu Lukaku are just a few names in a star-studded team that will all be crucial to their hopes in Russia. Lukaku, in particular, has been in fine form for his country of late. He is now their record scorer having surpassed the previous record of 31 back in November, before scoring 29 goals in his debut season for Manchester United. With Messrs Hazard, KDB and Dries Mertens supplying him, he should grab a hatful of goals this summer. Lukaku will lead the line in every match he’s available and as a result, he isn’t a bad bet for the golden boot award.

Belgium’s real problem has always been trying to get their star names to gel. They have always looked like 11, incredibly talented, individuals on a pitch. Roberto Martinez’s main task is to turn them into a more fluid, cohesive side. At the back, they should have Vincent Kompany available despite trudging off in their latest warm-up friendly.

Panama secured their place in the World Cup on goal difference. They finished third in their qualifying group and avoided the play-offs by the tightest of margins. They picked up 13 points from ten games, winning just three. Roman Torres was their top-scorer in qualifying but the striker has just recovered from injury and it remains to be seen whether he will be at his best. With that in mind, their fortunes may rely on goalkeeper Jaime Penedo and New York Red Bulls defender Fidel Escobar. Both were key men during qualifying and come into the tournament off the back of good seasons with their respective clubs.

Without being disrespectful, the main aim for Panama is to avoid getting thumped. Therefore, I expect Belgium to comfortably win. They will be far too strong for Panama but the Red Devils will need to be patient to break down their five-at-the-back rearguard.

Belgium vs Panama will be televised in the UK on BBC 1 with kick-off at 16:00 GMT.