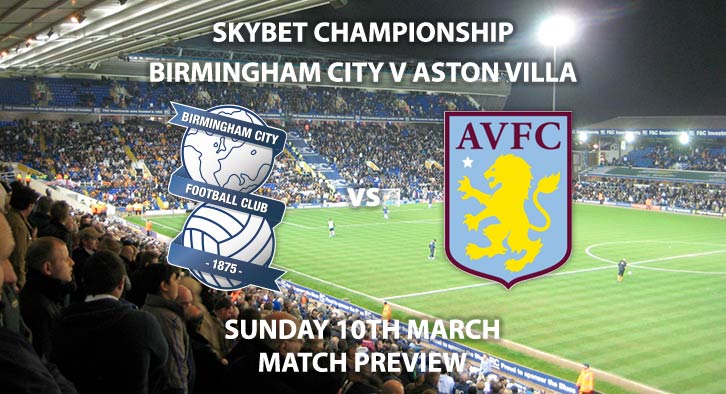 The second city derby is back for its 128th rendition as Birmingham City will host Aston Villa in SkyBet Championship action this Sunday.

The hosts have surprised many this season as they still remain contenders for a play-off spot. However, their last outing will need rectifying as they lost 2-0 to Hull. Aston villa have been incredibly inconsistent this season however their previous match saw them batter Derby County 4-0.

Birmingham City are 13/8 to win this match on SkyBet – with recent form going in their favour. Garry Monk has set out his side to prioritise defending and catch teams in the break. This tactic has worked very well this season however in this derby, the tension means it can turn chaotic. Luckily for him, he has February’s player of the month on his side in Che Adams. The striker has 21 goals for the season and is priced at 7/5 to score anytime.

The Blues opened the scoring in the last derby however went on to lose 4-2. They are priced at 1/1 to score first by SkyBet.

The bookmakers just cannot split these two and SkyBet have also priced Aston Villa are 13/8 to win. Aston Villa have the capability to be much higher up in the table, however they have struggled form. They are boosted by the return of Jack Grealish, who scored in the last derby match. Not only that, but he scored a contender for goal of the season in their last match against Derby County and is priced at a tempting 4/1 to score anytime.

Tammy Abraham has been the most prolific in claret this season and has 21 goals in the league. He is 8/5 to score anytime.

The referee for this match will be Tim Robinson. This tie could be a recipe for booking points; as Robinson has averaged 44.8 booking points this season and their last 2 outings have seen over 50 booking points.