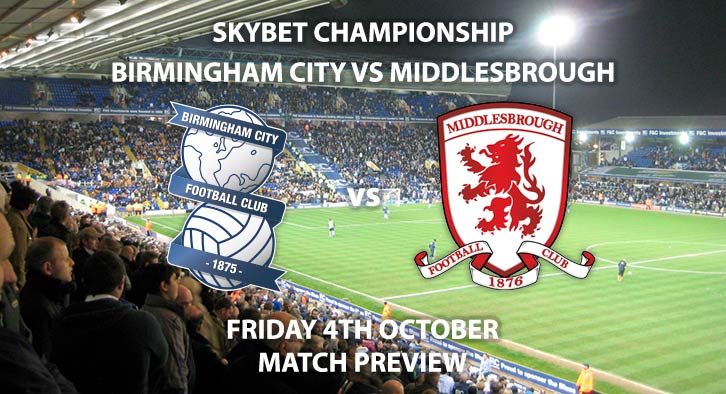 Birmingham City return to St Andrews on Friday night as they host Middlesbrough in the SkyBet Championship.

Both sides come into Friday evening’s fixture following a mixed set of results on Tuesday night, where both failed to win their respective matches. Boro drew 1-1 at home with Preston, whereas Blues were defeated 1-0 away at Wigan. The recent form of these two sides has been poor to say the least. Middlesbrough have won one of their last six matches, and they currently sit 19th in the Championship. Meanwhile Birmingham have lost each of their last three matches, and will want to return to winning ways, beginning with Friday night.

Birmingham’s Lukas Jutkiewicz has started this Championship season with three goals in eight matches. There is an added responsibility on the shoulders this season for the 30-year old, following the departure of last seasons top scorer Che Adams, who joined Southampton in the summer. Jutkiewicz netted fourteen times for Blues last season but failed to score in both encounters with Friday night’s opponents. Jutkiewicz to score anytime is priced at 2/1 on SkyBet.

If the recent head to head form between these two sides is anything to go by, then Middlesbrough will be fancying their chances ahead of this encounter. Boro have completed a league double over Birmingham for the last two seasons and are unbeaten in their last ten matches against them, a run which stretches back to March 2013.

The most recent meeting between the two was in January at St Andrews, where Middlesbrough came away with a 2-1 victory; a result which they will be desperate to repeat on Friday evening. Middlesbrough to win, and BTTS is priced at 7/1 on SkyBet.

The referee for this fixture is Jeremy Simpson. Simpson has taken charge of two Championship matches so far this season, administering six yellow cards in the process. This considered, I would recommend a maximum of 40+ booking points for this fixture.

This game will be broadcast live on Sky Sports football on Friday evening with kick-off scheduled to take place at 19:45 BST.

Despite the uninspiring form of these two sides I am predicting Birmingham to return to winning ways and claim all three points on Friday night. Middlesbrough’s form in general has been poor this season, and they have failed to win away from home this campaign. Under the lights, and on home soil I am expecting Birmingham to grab the win.