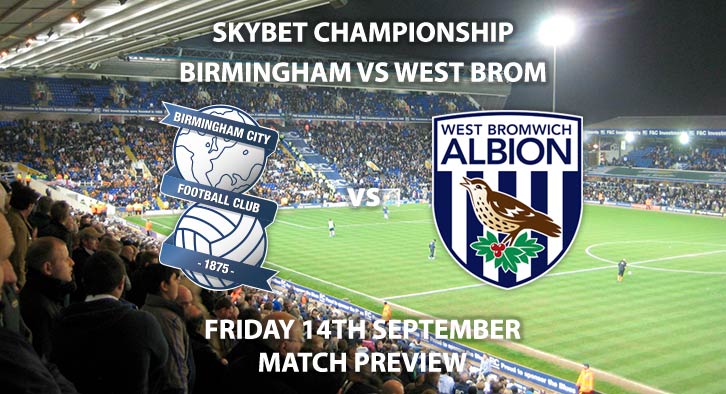 Both sides have had fairly different beginnings to their campaign. Birmingham are contuing to deal with numerous off the field issues that could see them have a 12-point deduction in the coming weeks for breach of financial fair play. Meanwhile, West Brom are in the top half of the table with their sights firmly set on the automatic promotion places.

The hosts are currently 20thin the league and are priced at 2/1 to cause an upset by SkyBet. Garry Monk’s side have struggled for goals despite some decent performances thus far. Their lack of creativity has seen them score four times in six outings. SkyBet have them priced at 2/5 to score 1+ goals. Their best chance at a goal will come from target man striker Lucas Jutkiewicz who is priceboosted at 8/1 to break the deadlock.

They will face a tough West Brom side who have had no issues scoring goals. Birmingham haven’t leaked goals however they will be on the backfoot with the pace that the Baggies attack possesses. Birmingham to win and BTTS is price-boosted is 13/2. However, five from their last six matches have seen under 2.5 goals so they have showcased their ability to drown opponents out.

West Brom are currently ninth in the league and are priced at 7/5 to win this match. The visitors have scored the most goals in the league so far out of everyone, with Jay Rodriguez and Dwight Gayle settling into life very well this season. Rodriguez has scored four goals whilst Gayle has three and one assist and they are priced at 13/2 to both score. The Baggies have also scored first in four of their last five matches. You can back them at 5/6 to score first – a great price.

The referee for this encounter will be Andrew Madley. He hasn’t been shy with his cards so far, having brandished 16 yellow cards and one red card to date. I’d expect him to have a bust evening ahead of him.

Birmingham City vs West Brom will be televised on Sky Sports Football and kicks off at 19:45.

Odds and markets last updated on Friday 14th September 2018 @18:00 GMT. Keep checking back to see if there’s any updates to markets – the time stamp in the previous sentence for when we update tips on this page will be updated.

Remember to keep visiting the tips and preview area for further updates and betting previews around this week-ends other Premier League and Championship games.