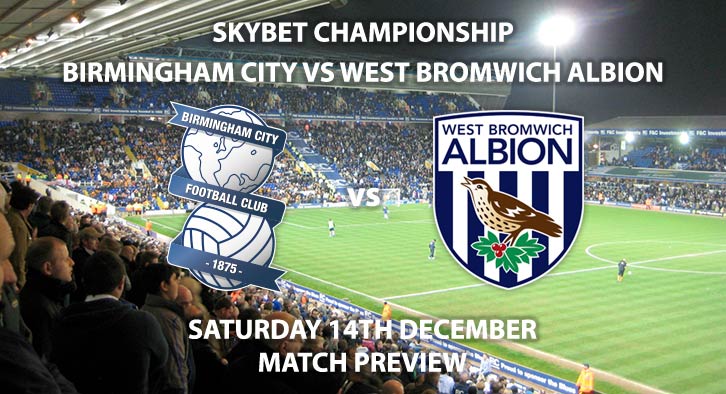 Birmingham City look to return to winning ways in the Championship when they host West Bromwich Albion at St Andrews on Saturday.

The Blues’ midweek defeat at home to QPR was their first loss since early November, a five-match unbeaten run. Pep Clotet’s side currently occupy 15th place in the Championship.

Their opponents West Brom on the other hand are unbeaten in their last eleven and haven’t lost since October 1st. Their defeat to league leaders Leeds is their only defeat of the season to date. Since the defeat, Slaven Bilic has seen his side win eight and draw three, and it’s no coincidence that Albion are joint favourites to return back to the top-flight.

West Brom are currently second in the division, level on points with Leeds and one less in goal difference. It’s tight at the top.

A win for the Baggies on Saturday lunchtime will see them go top. Leeds kick-off at 3:00, so its an opportunity for the Baggies to sit top of the pile, albeit for potentially a small period of time.

The Baggies have failed to score in only one of their twenty-one Championship matches this season. (1-0 defeat to Leeds in October).

The last time these two sides locked horns was in March, which saw West Brom run out 3-2 winners on the day. The Baggies haven’t lost to Birmingham in thirteen years, a six-game unbeaten run.

In the last six fixtures between these two, BTTS has landed every time. That coincided with West Brom’s free-scoring ability this season, is surely a market worth exploring ahead of this fixture.

The referee for this clash is Darren England. England has taken charge of ten Championship affairs this season, accumulating a total of twenty-nine yellow cards. This considered I would recommend a minimum of 30+ yellow cards. England has overseen matches concerning these two teams already this season he took charge of West Brom’s opening day win over Nottingham Forest where he awarded one yellow card, and Birmingham’s 1-0 win over Blackburn in October, where four yellow cards were issued.

This game will be shown live on Sky Sports Football, with kick-off scheduled for 12:30 GMT on Saturday lunchtime.