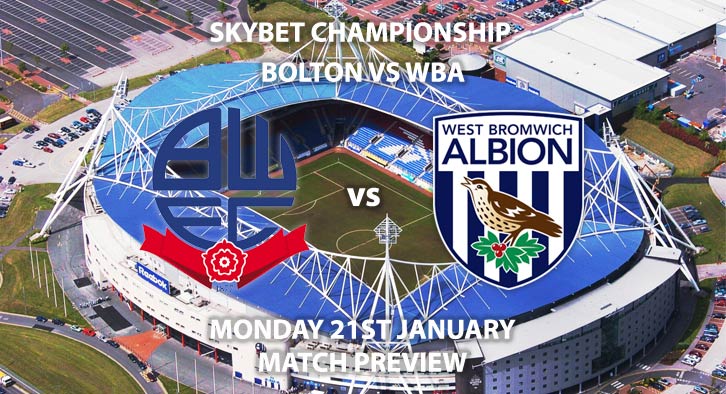 Both clubs have had relatively different campaigns so far. Bolton are currently 23rdin the table and are in great danger of relegation to League One. Meanwhile West Brom are in a hunt for automatic promotion and are currently 4thin the league standings.

Bolton are priced at 7/2 by SkyBet to win this match in front of a home crowd. The season has been a miserable one at the Macron Stadium as the Championship’s lowest goal scorers have scored just three in their last six outings. However, their recent home form has shown improvement with two wins and one draw in their last three matches in all competitions. Whilst no one has shone in this failing Bolton side, Josh Magennis is their highest scorer with four for the season. He is 13/5 to score anytime.

Bolton have only managed to keep a clean sheet in 3 of their 13 home matches this season. It is likely that the visitors will find the net. SkyBet are offering 4/5 for both teams to score.

West Brom are the favourites and are priced at 4/5. The Baggies enter this match in decent form. They are still the league’s highest goal scorers with 55 netted and their previous outing saw club top scorer Dwight Gayle score early on against high flyers Norwich. Gayle has 14 for the season and has been a primary threat at the spearhead of the attack. He is 7/2 to score first.

On the road West Brom have not slowed down their bid for promotion. Darren Moore’s side have failed to score in just three of their 13 away matches. SkyBet have price boosted odds to 3/1 for West Brom to win and both teams to score.

The referee for this match will be David Webb. The official has been rather lenient this season and has averaged just 23.6 booking points in his 14 Championship matches.

Bolton vs West Brom will be televised on Sky Sports Main Event HD and kicks off at 20:00.

– The visitors have too much attacking fire power for the struggling hosts.