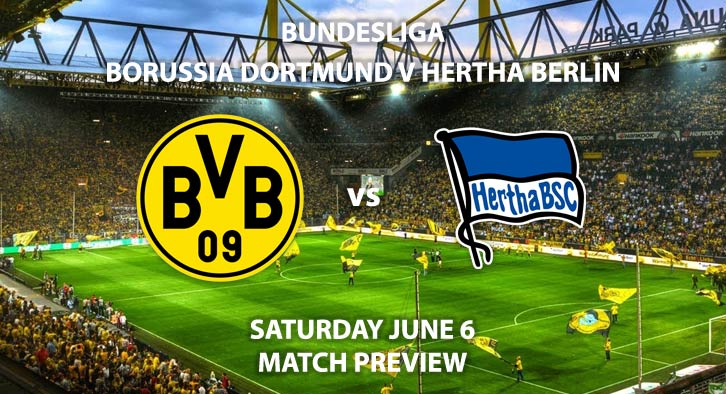 Dortmund enter the match on the back of a massive 6-1 demolition job against bottom of the table Paderborn. Whilst their title hopes seem to have faded, they still have to secure a top four finish and looked well on form last time out. Meanwhile, Hertha are still hopeful they can make up the ground in the race for Europa League qualification.

Borussia Dortmund are favourites for this encounter and are priced at 1/3 by SkyBet to win the match. Lucien Favre’s side bounced back from their Bayern heartache with a thumping 6-1 victory to restore some confidence around the squad. Their fluid style of attacking was on full display and will strike fear into the Hertha defence, who have looked relatively strong since the Bundesliga restart.

In attack, star striker Erling Braut Haaland is still a major doubt due to a knee injury, However, they still have the formidable Jadon Sancho, who scored a hat-trick last weekend, and is priced at 3/1 to score first.

Hertha Berlin will have their work cut out in this match and are priced at 13/2 to pull off a shock away victory. The visitors are in fine form as they enter this match up. They are unbeaten in six Bundesliga matches; with three wins and three draws. In their four matches back, they have scored eleven goals, however, they face their toughest test yet against Dortmund.

In attack, Krzysztof Piatek has scored in his last two outings and is priced at 5/2 to score anytime.

Last time these two met, a fast start from Dortmund with goals from Jadon Sancho and Thorgan Hazard secured a 2-1 victory for Lucien Favre’s team as 65 booking points were awarded. SkyBet are offering 11/10 for 40+ booking points.

– The hosts have far too much quality all over the pitch and should cruise to an easy victory.