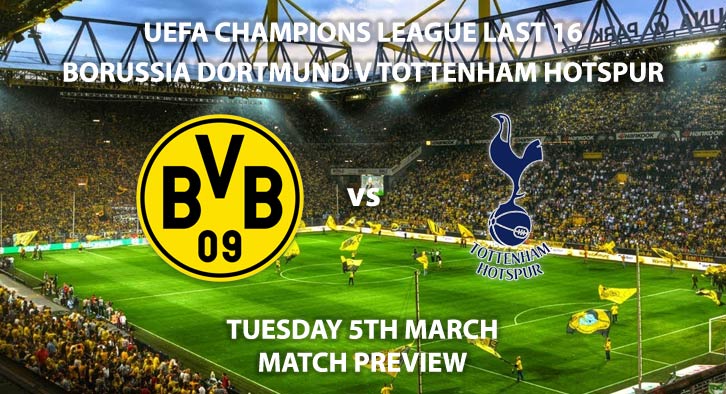 Tottenham Hotspur are back in UEFA Champions League action as they travel to Borussia Dortmund in hopes of retaining their aggregate lead.

The first leg at Wembley Stadium saw Mauricio Pochettino’s Spurs run away with the match as they came out 3-0 victors. The Germans have a huge task ahead of them, with history showing just seven teams out of 130 in the history of this competition have turned around a 3-0 loss in the first-leg.

Dortmund are favourites to win this match from SkyBet, who have priced them at 10/11. However, the bookmakers don’t fancy their chances at qualifying for the next round as they are priced at 8/1 to win over the two legs. The Germans are going through a tricky patch given how impressive their season has been. They have just one win from their last five matches however one man hoping to turn their fortunes will be poster boy Marco Reus. The winger has been declared fit for the match and has managed six goals in his last nine matches. He is 11/8 to score anytime.

The two teams last five meetings have all resulted in goals being scored, with at least 3 goals scored. They are 21/10 to win and for both teams to score.

Tottenham are not favourites for the second-leg as many expect them to defend their lead. SkyBet have priced them at 11/4 to win at full-time. Spurs did themselves a huge favour by keeping a clean sheet in the first leg as Dortmund have no away goals. If they manage to bag a goal in this leg than the tie should be all over. Everyone supporting Spurs will be expecting Harry Kane to deliver the goods as his record of three goals in three games against Dortmund makes him a hot contender to score. He is 7/5 to score anytime.

The referee for this match will be Dutch official Danny Makkelie. The man in the middle could have his work cut-out, as many knockout matches see plenty of cards. 50+ booking points is priced at 11/8.

Borussia Dortmund vs Tottenham Hotspur will be televised on BT Sport 2 HD and kicks off at 20:00.

– The home side will have to throw the kitchen sink, but the visitors will be prepared.

Odds and markets last updated on Tuesday 5th March 2019 @11:30 GMT. Keep checking back to see if there’s any updates to markets – the time stamp in the previous sentence for when we update tips on this page will be updated.

Remember to keep visiting the tips and preview area for further updates and betting previews around this weeks remaining Europa League and Premier League fixtures.