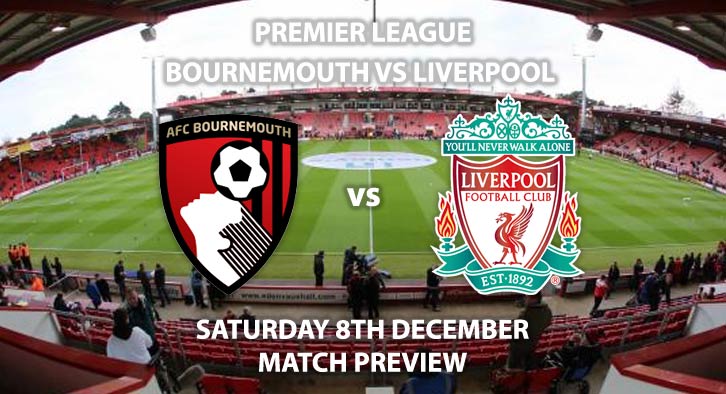 The home side were back to winning ways after a run of poor results against Huddersfield in midweek. Meanwhile Liverpool remain unbeaten after their 3-1 victory over Burnley.

Bournemouth are priced at 19/5 to pull off a shock by SkyBet. Their midweek victory over Huddersfield ended a four-game loss streak. In that match, they only had 33% possession, proving they can catch teams on the counter attack. Callum Wilson has been the shining star in their squad this season with 8 goals and 5 assists. The England striker is priced at 13/2 to score first.

Defensively, Bournemouth have a lot of improving to do and this match will be another tough test on their defensive line. They have conceded 22 goals in 15 matches. For Bournemouth to win and both teams to score, SkyBet are offering 7/1.

Liverpool are priced at 4/6 to continue their unbeaten campaign with another win. Their play style has come under some scrutiny as they are less free flowing and more organised however they seem more poised at the back this season. They currently have the best defensive record in the league with just six goals conceded. Despite Wilson, Liverpool shouldn’t have too many headaches on the weekend. The Reds are a cracking 21/10 to win to nil.

Going forward, Liverpool have been their usual clinical selves despite the lack of last seasons star dust. Mohamed Salah has remained the poster boy for the visitors and has seven goals and four assists so far this season. He is priced at 10/3 to score first. They also have a good goal scoring record against their opponents with three or more goals scored in three of their last four encounters. For Klopp’s side to score 3+ goals, SkyBet are offering 15/8.

The referee for this match will be Lee Mason. The official has averaged 34.3 booking points in his 7 Premier League matches this season.

Bournemouth vs Liverpool will be televised on BT Sport 2 HD and kicks off at 12:30.

Given recent form, Liverpool shouldn’t have too many problems getting three points.

Odds and markets last updated on Saturday 8th December @11:15 GMT. Keep checking back to see if there’s any updates to markets – the time stamp in the previous sentence for when we update tips on this page will be updated.