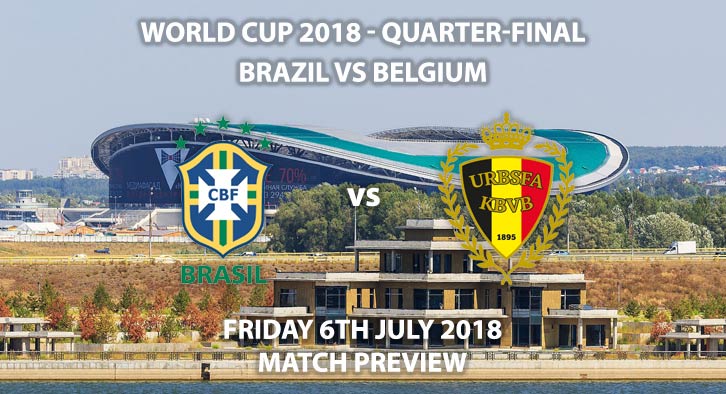 Brazil vs Belgium – a tasty-looking quarter-final, with both sides determined to make it to the last four of the World Cup.

Brazil have been installed as the bookies’ favourite for the tournament from day one, and that remains the same. They coasted past Mexico in the last round, with second-half goals from Neymar and Roberto Firmino making the difference. Whilst Mexico did have spells of pressure during the match, there was only going to be one winner. One thing that has gone under the radar is Brazil’s incredible defensive record. They have conceded just five goals in 22 matches, and just once at this World Cup. Miranda and Thiago Silva have been rock-solid at the heart of their backline, with Fagner and Marcelo/Filipe Luis at full-back.

In attack, Neymar seems to be gearing up to his best. The PSG playmaker has scored two goals in his last three games, also registering one assist. However, in my opinion, Phillipe Coutinho is actually Brazil’s most important player. The former Liverpool star has been their chief source of creativity from a central midfield position. His vision and range of passing is exemplary, whilst he always carries a goal threat, especially from long range.

Belgium needed a last-minute winner to turn around a two-goal deficit against Japan. Roberto Martinez’s team found themselves 2-0 down in the second half but managed to restore parity through Jan Vertonghen and substitute Marouane Fellaini. Then, from Japan’s own corner, Nacer Chadli complete the comeback following a swift counter-attack. There’s no doubt that Belgium’s subs made the difference, but it was actually a change in Kevin De Bruyne’s position that made the difference. With Dries Mertens going off, KDB was allowed to play further forward, which prompted Belgium’s upturn in performance. Martinez has been using him too deep and to get the best out of the City star, he needs to play in a more advanced role.

Milorad Masic is the referee for this match. The Serbian has averaged 4.26 yellow cards per game, along with 0.24 reds in 117 international matches. There are number of players (including Neymar), who are one caution away from missing the semi-finals. With that in mind, I’d suggest a maximum of 40+ total match booking points for this game.

I think Martinez will opt for an extra midfielder against Brazil’s trio, which will push De Bruyne closer to Romelu Lukaku. If they can get him on the ball, there’s no doubt the pair, accompanied by Eden Hazard can cause problems. At the other end, Brazil will feel confident they can score goals, after watching Japan strike twice. Overall, I think Brazil will win, by a tight margin. It will be interesting to see how Brazil’s impressive defence does hold up against Belgium’s attack, but I think they will progress into the last four.

Keep visiting Tips and Previews ahead of games to get our suggested tips and correct score picks for the remainders ties in the quarter finals. Tips updated at 17:22 GMT on 6th July 2018.