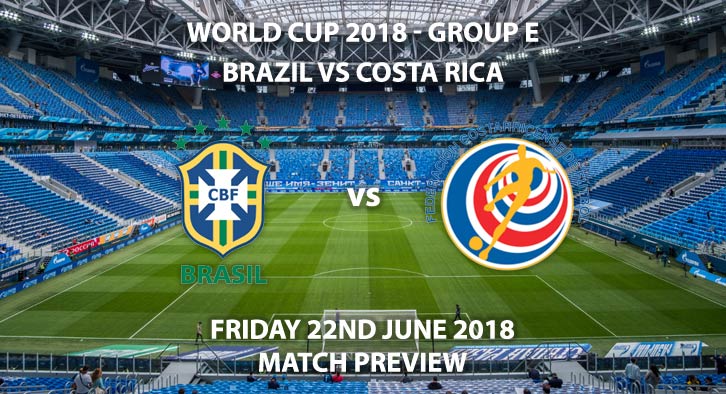 Brazil vs Costa Rica. The South-American favourites face Costa Rica in Group E, with both sides looking for their first win after disappointing results in their first World Cup matches.

The bookies’ favourites for the competition didn’t get off to the best of starts, as they were held by Switzerland. Despite taking the lead through Phillipe Coutinho’s wonder goal, Brazil surrendered their lead and drew 1-1. With Switzerland defending so deep and compact, Brazil struggled to carve a way through. Although they did have chances to win the game, which they should have converted, few would begrudge the Swiss of a point. Neymar found himself with swarmed by two men whenever he picked up possession; a sign of just how dangerous the PSG star can be. That result has left Group E wide open, with three teams already having points on the board. In order to avoid an embarrassing early exit, Brazil need to master how to break teams down and how to keep the lead once they have.

Costa Rica find already find themselves playing catch-up after they lost 1-0 to Serbia. Aleksandar Kolarov’s wonderful free-kick separated the two sides, although in truth it was a goal that Serbia deserved. Costa Rica’s main issue, as I expected before the tournament began, is scoring goals. They’re solid, without being spectacular, in defence but lack any sort of threat up front. Joel Campbell was a surprise omission from their starting 11 but looked the most dangerous when he joined the action as a substitute. Costa Rica look a shadow of the side that blew England, Italy and Uruguay out of the water four years ago. There appears to be little pace or energy; which was the hallmark of their side in Brazil.

Brazil need to seize control of Group E. Anything other than winning the group would be seen as a major underachievement – making this game a must win. Costa Rica offered very little against Serbia and whilst that was just one game, I’m struggling to see them taking anything from this match.