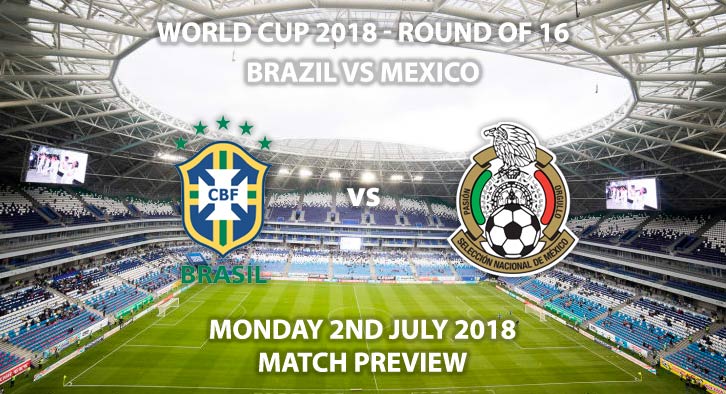 Brazil vs Mexico is the first of two Round of 16 at the 2018 FIFA World Cup this Monday.

Brazil are many people’s favourite to win the competition, following the shock exit of Germany. Neymar and Coutinho have been their flamboyant selves and took most of the plaudits throughout the group stage. Mexico have been a surprise package of the tournament so far. They qualified second from Group F after taking a 3-0 spanking from Sweden. However, their earlier performances against Germany and South Korea earnt their spot in the knockout rounds.

Brazil, priced at 1/2 by SkyBet, are the obvious favourites for this encounter. Their talent from front to back is undeniably one of the most dangerous in the tournament and this was illustrated in their last outing against Serbia. Unlikely goal scorers Paulinho and Thiago Silva secured top spot for the Samba Boys but their front three and Coutinho were causing all sorts of problems.

Neymar is the obvious potent goal threat for the Brazilians and is priced at 11/4 to score first. However, Coutinho has been joining the counter attacks and utilizing his pace, dribbling ability and eye for goal. He could be worth backing to score first at 5/1.

Despite their very poor showing against Sweden, Mexico have that aura about them that they can pull off something special. Winger Hirving Lozano has been one of the best players of the tournament and Javier Hernandez has also been putting in great shifts along Carlos Vela. The squad is very evenly balanced however they will struggle to see much of the ball against this Brazilian side.

West Ham striker Hernandez is the Mexicans target man and is priced at 11/4 to score anytime.

With the tournament now reaching the knockout stages, betting markets are available on the method of qualification. It is possible either nation may need extra-time or penalties to decide their fate. The favourites Brazil are priced at 8/1 to win in extra-time and 14/1 to win on penalties.

The referee for this match will be Italy’s, Gianluca Rocchi. Mexico have received five yellow cards so far and Brazil have received three yellow cards. Neither of these sides are renowned for a physical style of play however bookings are more frequent in knockout matches. Rocchi has given out 7 cards in his 3 games so far this world cup and was one of Seria A’s higher carders in terms of Referee’s. There have been at least 3 yellow cards (in some cases more), in the last 5 head to head meetings between these two sides.

Brazil vs Mexico will be televised live in the UK on ITV 1 with kick-off at 15:00.

Don’t forget – we will be previewing as many if not all the FIFA 2018 World Cup Group Stage games. Keep visiting Tips and Previews ahead of games to get our suggested tips and correct score picks for the games.Tips updated at 12:15 GMT on 2nd July 2018. Markets will not be updated again prior to the game kicking off.