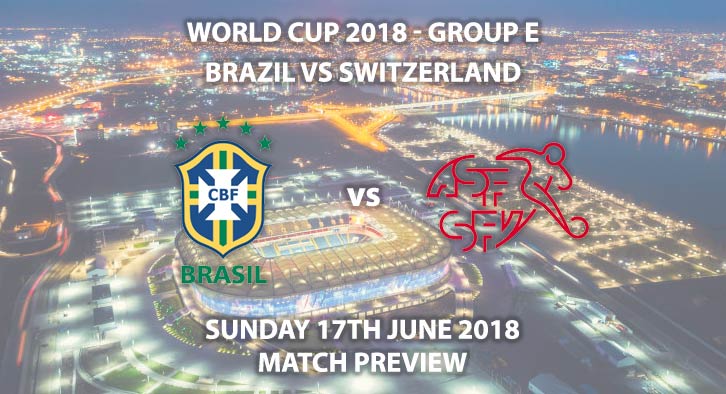 Brazil vs Switzerland – Brazil will be hoping to kick off their World Cup campaign with a bang when they face Switzerland on Sunday in Group E.

With Neymar back fit and firing, Brazil will be confident of their chances this summer. The Brazilian missed the last three months through injury but has returned in style, grabbing two goals in his last two games. The PSG winger looks sharp and now fully rested as he aims to lead his side to glory. The main selection dilemma for Tite is upfront with both Roberto Firmino and Gabriel Jesus vying for the number nine role.

Jesus is expected to pip the Liverpool forward to starting berth, although Firmino offers a great option from the bench. Phillipe Coutinho will also be hoping to carry his late-season form for Barcelona into the yellow kit of Brazil, where he is expected to start on the right of a three-man attack. Since taking over as manager, following their humiliating 7-1 defeat to Germany on their own backyard, Tite has transformed Brazil. Now, four years on, they are one of the most fancied sides to win the tournament, alongside world champions Germany.

Switzerland needed the play-offs to secure their spot in this year’s tournament, with Portugal topping their qualifying group. They managed to secured their place in the World Cup following a 1-0 aggregate win over Northern Ireland. Stoke City winger Xherdan Shaqiri will be hoping to earn himself a move away from the Potters by leading Switzerland out of Group E, whilst Granit Xhaka will be hoping to impress new Gunners boss Unai Emery. Switzerland will expect to finish runners-up in the group, although Costa Rica and Serbia could prove stern opposition.

Cesar Arturo Ramos is the referee for Brazil’s opening game. The Mexican is making his World Cup debut on Sunday. In 29 international matches he has averaged 2.69 yellow cards and 0.1 reds, awarding 0.14 penalties per game along the way. Therefore, I would recommend a maximum of 30+ booking points for any bets.

Although Switzerland are ranked in the top ten of the FIFA world rankings, they don’t have a side capable of competing with the very best. Brazil are my personal tip for the tournament and I consequently expect to get their campaign underway with a win.

Brazil vs Switzerland will be televised live in the UK on ITV 1 with kick-off at 19:00 GMT.