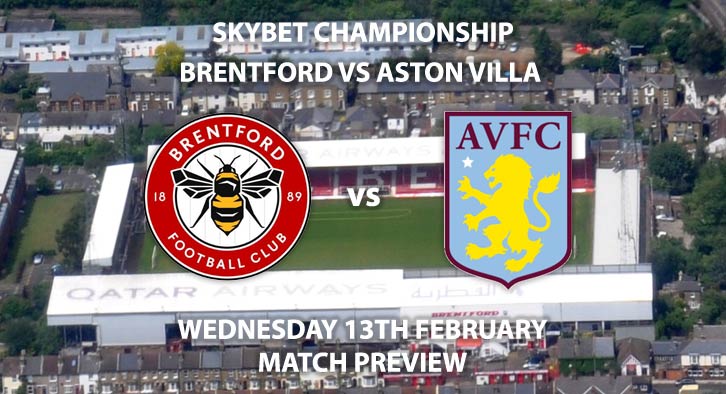 Brentford will play host to a familiar face on Wednesday night as Dean Smith makes his first trip back to Griffin Park as Aston Villa manager.

Seven points separate the sides however Brentford have played a match less. They currently sit 18thin the league, 11 points from the drop whilst their opponents are 10th and 6 points from the play-off spots.

Brentford are priced at 11/10 by SkyBet to win the match. The Bees have not been goal shy in recent weeks. Their 5-2 comeback against Blackburn was one to remember and one where familiar faces were on the scoresheet. None more familiar than striker Neal Maupay, who has now raised his tally to 17 for the season. The Frenchman is 4/1 to score first.

Defensively, Brentford have not been exemplary. They have kept just two clean sheets in their last 10 matches in all competitions and they now face the league’s third most potent attack. SkyBet are offering 6/1 for both teams to score in both halves.

Aston Villa are priced at 9/4 – a very tempting market given their calibre. Dean Smith’s side will still be on a high after their dramatic late comeback against Sheffield United on the weekend. Amongst the goals in that match was on loan striker Tammy Abraham. The towering talent has now scored 20 goals this season and is 5/4 to score anytime this Wednesday.

Just like their opponents, Villa have kept two clean sheets in their last ten outings in all competitions. However, with their attacking talent and relentless goal scoring, they will fancy their chances. They are 4/1 to win and both teams to score.

The referee for this match will be Gavin Ward. The official has been rather lenient for much of this season and has averaged 29.6 booking points in his 12 Championship matches this season.

Brentford vs Aston Villa will be televised on Sky Sports Main Event HD and kicks off at 19:45.

– The away side’s constant attacking will wear down the home side.

Odds and markets last updated on Wednesday 13th February 2018 @18:13 GMT. Keep checking back to see if there’s any updates to markets – the time stamp in the previous sentence for when we update tips on this page will be updated.

Remember to keep visiting the tips and preview area for further updates and betting previews around this weeks Europa League and FA Cup games.