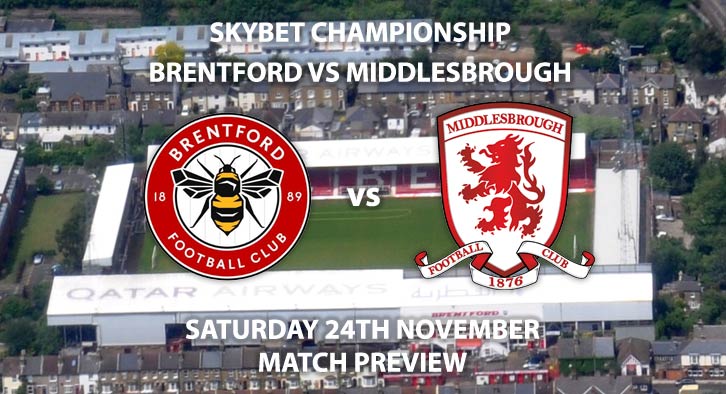 Brentford and Middlesbrough will lock horns in SkyBet Championship action this Saturday.

The bookmakers are struggling to split this one, with neither side flourishing in recent form. Brentford have fallen far down the table in recent weeks with only seven points from their last ten matches. Meanwhile, the visitors have struggled to find the net with two 0-0 draws in their last four outings.

The hosts are priced at 13/10 to win this one by SkyBet. Despite their poor recent form, their home form has remained a positive for them. They have lost just one of their eight home matches and have averaged two goals per game. Neal Maupay has been their knight in shining armour as he leads the top scorer table with 12 goals this season. The French striker has made a good partnership with Ollie Watkins and Sergi Canos as an attacking force and is 4/1 to open the scoring.

As mentioned, Brentford’s attacking prowess has been impressive as they are the highest scoring team in the bottom half of the table. They have averaged 1.6 goals per match and are 5/4 to score 2+ goals this weekend.

Middlesbrough are priced at a very tempting 21/10. Tony Pulis’ side haven’t been as prolific as their opponents and have the lowest goal tally in the top seven. However, where they make up for the lack of goals is in their defence. They have conceded just eight goals in their 17 league matches this season. They have kept a clean sheet in 64% of their matches and are 5/2 to do it again.

Going forward, Britt Assombolonga has been their biggest attacking threat. The Congo international has five goals to his name and is 2/1 to score anytime.

The referee for this match will be John Brooks. The official has averaged 43.5 booking points in his 10 Championship matches. For 20+ booking points each team, SkyBet are offering 13/8.

Brentford vs Middlesbrough will be televised on Sky Sports Football HD and kicks off at 17:30.

– I can see this being a tight and tense affair. Middlesbrough will just nick it.

Odds and markets last updated on Saturday 24th November @11:27 GMT. Keep checking back to see if there’s any updates to markets – the time stamp in the previous sentence for when we update tips on this page will be updated.